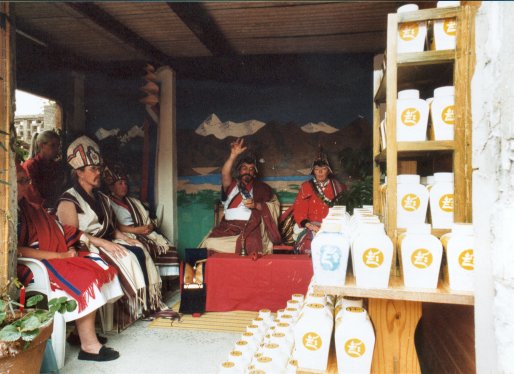 The blessing ceremony was a delightful event, favoured with good weather and a banquet of food that people had brought to share. The gTérbum almost seemed to start to hum as Ngak’chang Rinpoche and Khandro Déchen performed the rite and scattered rice over them. At the end Ngala Nor’dzin read out the list of extraordinary precious substances contained by the ceramic vases that had been created.

After the ceremony Ngak’chang Rinpoche and Khandro Déchen took eleven gTérbum away with them to give to various important Lamas, and several other people took one away. It was a strange feeling for Ngala Nor’dzin, Ngala ’ö-Dzin and Thrinlé to realise that the project was really completed, and that these magnificent creations that had been part of their lives for eight years were going to new resting places – to be buried or to be placed in special places and on people’s shrines. Thrinlé Khandro said:
I felt like my babies were flying the nest!