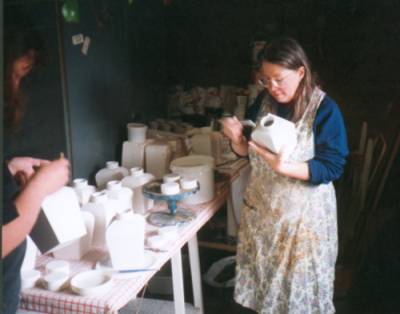 The fettled casts were then fired in Ngala Nor’dzin’s kiln to 1120C. Only fifteen casts could fit in the kiln at a time and two days needed to be allowed for the firing, so it took quite a while to complete this part of the process. Once the casts were fired, they had to be protected from dust and grease in this bisque form, so they were all stored in plastic bags until they could be glazed. The next stage of the process was to glaze the bisque-fired vases, to turn them into shiny white pots. To get a perfect finish with slop glazing is quite a skilled process. The less skilled tend to leave finger marks and other blemishes on the outsides of the pots, so Ngala Nor’dzin decided to only slop glaze the insides and use brush-on glaze for the outsides. Brush-on glaze is a little more expensive, but even inexperienced people can achieve a perfect finish if three coats are applied. One problem the gTérbum team encountered was that painting white glaze on a white pot made it difficult to see how many coats if any it had already had! Once the vases were glazed they were fired again to 1050°C to mature the glaze. The Treasure Vases did not need to be stored quite so carefully once they were sealed with glaze.