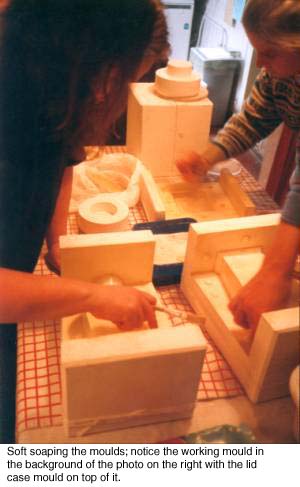 The working moulds were quite large. Imagine the size of a finished gTérbum and add 10% for the amount they shrink in firing. Then imagine them encased in a three-part plaster mould (base and two sides) about two inches (5cm) thick, all held together with tyre inner-tubing and filled with liquid slip.

Ngala Nor’dzin remembers:
The weight of the moulds to lift and pour off the excess slip was at the limit of my strength.

The gTérbum team set up the following procedure:
1. Pour the deflocculated casting slip into five moulds, knock them to release air bubbles, and leave for about 20 minutes;
2. Agitate the moulds to reactivate the slip, and then pour the excess slip back into the buckets, leaving the moulds upside down on the buckets to drain;
3. Set up the second five moulds and repeat 1 and 2.
4. Stand the moulds the right way up and allow the casts to dry until firm enough to remove;
5. Carefully take the moulds apart and remove the firm cast;
6. Fettle the cast to remove seam lines and tidy up the neck;
7. Reassemble the moulds and begin again.

Occasionally a cast would go wrong because the slip had been too wet or not wet enough; because it had been poured too slowly; because it had been taken out of the mould too quickly; or because the mould hadn’t been put together tightly enough and the slip simply drained out the sides as it was poured in. One of the problems with ceramics is that something can go wrong at every stage, so extras of everything need to be made to allow for losses at each stage. Approximately 150 vases were made, of which about 140 survived to be glazed, and of which about 130 survived to be decorated. As the aim was to create 111 gTérbum, 120 were decorated plus a few samples, of which 118 were good enough in the end to be filled with precious substances.