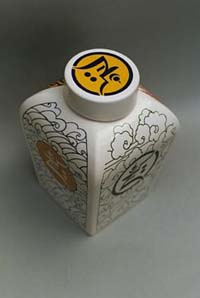 Ngak’chang Rinpoche and Khandro Déchen first spoke of gTérbums in the Autumn of 1991. At that time Tharchin Rinpoche had made 108 gTérbums at Pema ’ö-Sel Ling, his retreat land near Santa Cruz, California.

Tharchin Rinpoche says about Treasure Vases:
As prophesied by the Buddha Padmasambhava, the Treasure Vase is an ancient remedy for removing the suffering of all beings in times of degeneration. These Vases restore vitality to the Essence of the Elements (earth, water, fire, air and space) which have been depleted by pollutants and poisons in the environment. They have the power to magnetise wealth and abundance, improve health, remove obstacles to long life, pacify anger and warfare, increase wisdom and realisation for all beings within their mandalas. Traditionally a Treasure Vase is kept in one’s home or buried on a mountain top, at the source of water (springs, lakes, oceans), in a field or garden. In the home it is kept in a high clean place, preferably an altar, and handled with great care as it contains many sacred relics and holy substances. Practising in front of it will enrich the qualities of one’s family and the power of the Vase. Burying the Vase on a mountain top will increase the Essence of the elements and remove obscurations and sufferings of Lha, kLu and humans. Burying the Vase at a water source will increase the water element energy and the energy of the kLu (water spirits). This is especially beneficial in times of drought. Burying the Vase in a field or garden will enrich abundance and promote growth. Burying the vase in a practice place will empower the practitioners and secure the success of the practices. To bury a Vase requires a special ceremony to be performed by a qualified Lama . This can be performed on site or simultaneously from a distance.

Ngak’chang Rinpoche was presented with one of Tharchin Rinpoche’s first gTérbums along with the Düd’jom gTér text, which describes the process through which they are made and consecrated. Subsequently, Ngak’chang Rinpoche had an important dream after which he deemed it timely to make 111 Aro gTérbums.

Ngak’chang Rinpoche recounted the dream as follows:
After entering the vivid sensory dimension of Ögyen Dzambhala and Tsogyel Dzambhala, they dissolved into space through the elements from space to earth, and I found myself sitting with Khandro Déchen and a large group of disciples. The disciples were filling gTérbums which had been made according to the gTérma of Khyungchen Aro Lingma. They were empowered through the awareness-spells of Ögyen Dzambhala and Tsogyel Dzambhala the wealth manifestations of Padmasambhava and Yeshé Tsogyel. The gTérbum is a four-sided Vase with a square lid. Each side of the gTérbum has the syllable Dzam upon it in the colour of the particular direction of the elements. It had a Yellow Dzam on the lid; a Blue Dzam on the South Face; a white Dzam on the East Face; a Green Dzam on the North Face; and a Red Dzam on the West Face. The gTérbum has a blue lid and a yellow body. The inside of the Vase is blue and the inside of the lid is yellow.