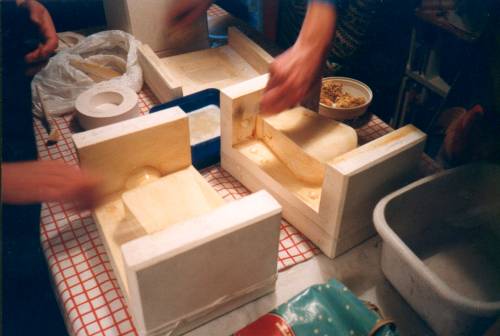 It took several weekend retreats to finish creating the working moulds, but eventually there were ten for the vase body and ten for the lid. There were three parts to the body moulds, so including the lid moulds, the team had to make thirty-six plaster of Paris mould parts.

Ngala ’ö-Dzin recalls:
It was a lengthy and messy process, but well worth the effort. It enabled us to create a production line of the casting process. Unfortunately we didn’t take many photographs in the early days of the project, so the visual record is somewhat incomplete.

It has to be borne in mind that technical and exacting work was being undertaken by people who had never worked with plaster, moulds or casting slip before. Ngala Nor’dzin produced a set of worksheets for apprentices to look at before the retreats so that they had some idea of the principle and function of the processes, potential problems and to emphasise the ‘must dos’ and the ‘must not dos’! All those who worked on the project were willing and enthusiastic and learned quickly. On the whole there were remarkably few disasters or problems. Fortunately Thrinlé Khandro became involved in the early days of the project. She already had skills in ceramic processes as well as being a talented artist, and was able to help Ngala Nor’dzin with overseeing the work.

For one retreat the gTérbum team had enough working moulds ready to begin casting while the last few moulds were completed. This meant casting had to happen in one area, while finishing moulds continued in another.

Thrinlé comments:
It is difficult to visualise the mess these processes create plaster all over the table and splatters on the floor; drips of clay all over the table and floor, and parings of dried clay from fettling. We had to ensure that no bits of plaster found their way into the casting slip, as plaster fragments cause explosions in the kiln.

On these retreats there would be periods of inactivity with regard to the gTérbum, when the team would engage in practice, and then suddenly frantic activity would be required because the moulds had to be poured out or casts removed. The structure and timescale of the retreats was governed by the needs of the gTérbum.