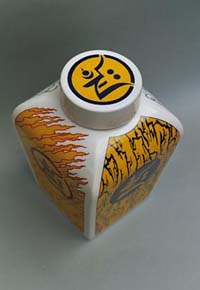 Ngak’chang Rinpoche knew that Ngala Nor’dzin was most likely to have the knowledge and experience of ceramics required to undertake such a project, and had the basic facilities such as a work room and a kiln.

Ngakma Nor’dzin says:
I was honoured to be asked by Ngak’chang Rinpoche to undertake this project. Though I don’t think I or anyone else then realised what a long time it would take to complete the gTérbum.

Ngak’chang Rinpoche continued in Apprentice Letter 11:
E.Ma.Ho! May Wealth and Abundance proliferate rampantly in the Vajra Family for the benefit of everyone and everything everywhere!

At the consecration ceremony, Ngala ’ö-Dzin and Ngala Nor’dzin read out a text that Ngak’chang Rinpoche and Khandro Déchen had prepared, which included the list of 111 ingredients. The text began:
These gTérbum have been blessed with many sacred substances and for those who have some sense of blessing and what blessing means these Aro gTér Treasure Vases will provide invaluable inspiration and act as a source of revitalisation and enrichment throughout the spaces of the elements. Some people think that we live in a dead world in which only overt substance and mechanical linkages are real. For Vajrayanists, however, the world is not a dead place but one which is alive with infinite vibrant connectiveness.