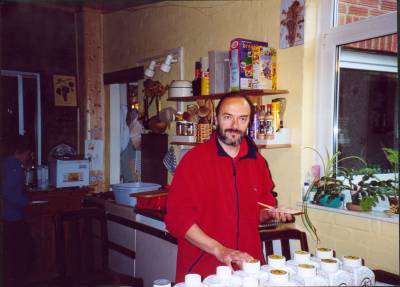 The dried clay balls were poured into finished gTérbum that had had both enamel firings. Everyone looked forward to this job because the clay balls made a wonderful musical chiming noise as they rattled into the vases. There was some concern at varying times about not having enough balls, or ending up with some over. The vases varied in thickness, the size of balls individuals rolled varied and some of the clay shrank more than other clay, so that the carefully weighed bags of clay turned out to be extremely approximate. In the end it all turned out perfectly – of course – with not a single ball over or any vase being short of a full complement.

The lids were then glued on with epoxy resin glue, so that they would never come off again. They were heavy now that they were full of clay balls and had to be carried with care.