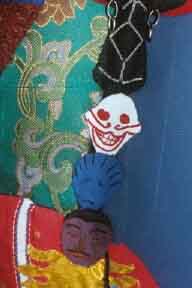 The whole process of making the Yeshé Tsogyel appliqué during a week in June, 2003, turned into an opportunity for teaching and transmission. As one apprentice said:
We had the opportunity to ask many questions, and discuss a great deal of teaching and practice material.

After the lotus petals were complete, the sun and moon were placed. Then we worked on the khatvangha. The symbology of the khatvangha is an entire teaching on its own.

The shaft of the khatvangha has eight sides which represent the Noble Eightfold path (the fourth Noble Truth) and the eight classes of protectors. At the end of the shaft is a dorje representing totality and completion.

Along the shaft of the khatvangha are crossed dorjes, a gTérbum and three heads. The crossed dorjes are symbolic of the indestructibility of beginningless wisdom mind. The gTérbum is symbolic of wealth and enrichment. The three heads – one freshly severed, one rotting and one a skull – are the symbols of the three spheres of being, chö-ku, long-ku and trül-ku which are unified by the shaft of the khatvangha demonstrating their inseparability.

Streamers of the colours of the five elements hang from the khatvangha, as well as a bell and dorje which represent emptiness and form. At the top of the khatvangha are the three prongs which pierce the fabric of attraction, aversion and indifference. Hanging from the prongs are two pairs of rings. These signify the four philosophical extremes that are denied by Dharma: eternalism and nihilism, monism and dualism. Finally the khatvangha is surmounted by wisdom fire – the fire that burns self-protection, justification and referentiality.

Khandro Déchen was given a khatvangha by Kyabjé Künzang Dorje Rinpoche & Jomo Sam’phel in 2003, and this may often be seen at Aro Lineage Open Retreats.