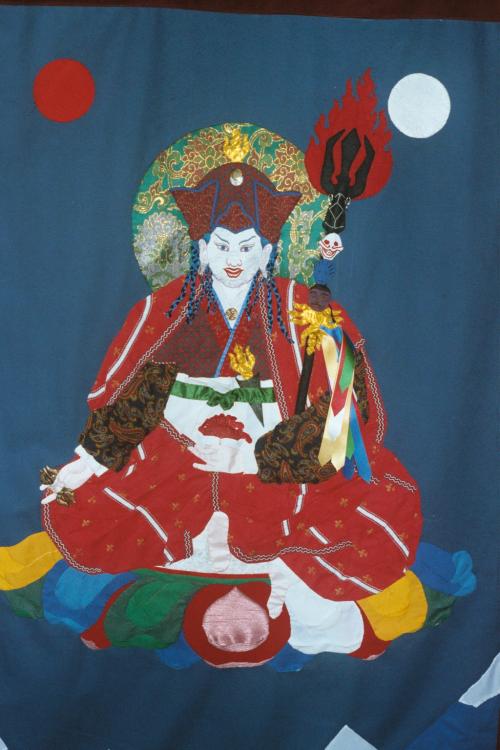 Gradually over the week of the craft retreat, Ngala Nor’dzin directed the process and order of events. After the lotus petals, the sun and moon were placed. Then we worked on the khatvangha, making the skulls, flames and tail separately. Then we assembled Yeshé Tsogyel’s robes, face and hat.

Lama Nor’dzin was particularly pleased with the attention to detail. She said:
The face of Yeshé Tsogyel had been embroidered in Nepal to Ngak’chang Rinpoche’s specific design. However we needed to add lengths of hair to the appliqué. Sang-gyé plaited ribbon hair extensions and included some strands of hair from Ngak’chang Rinpoche and Khandro Déchen, and from Kyabjé Chhi’mèd Rig’dzin Rinpoche in the plaits.

There was one memorable moment, when everyone thought we had really practically finished the appliqué. Lama Nor’dzin looked quizzically at the single red, white and blue braid and said, in a tone which betokened deep consideration:
Mmmm … I think we might need to double that braid to get the right effect.

This was towards the end of the last day, and some apprentices – being tired – insisted that the single width looked fine. However, Ngala Nor’dzin was not convinced, and so Naljorma Rin’dzin dashed out to her car and sped down to the haberdashers to buy another length before they closed. On her return a second row of braid was carefully sewn next to the first on the edges of the shawl. Surely it was now finished? But no – Ngala Nor’dzin felt that the blue of the central stripe of the shawl was not quite the right blue and we had to embroider over it with a better colour. Finally all agreed that these extra efforts did made a substantial difference and added to our experience of finishing the appliqué with a real sense of accomplishment.