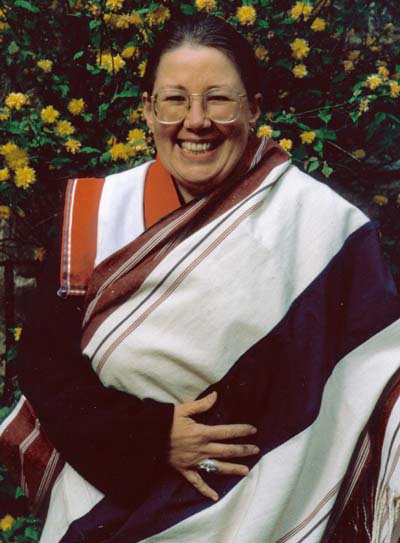 Even as a young girl Ngala Nor’dzin knew that she would be ordained one day. She always had an interest in religious practice – and as a girl, believed her ordination would be within the Church of England. Unfortunately—or fortunately as it turned out—the vicar who led the confirmation classes was far from inspiring. He was a middle-aged man who was painfully shy and ill-equipped to cope with the inquiring mind of a teenage nascent tantrika. Similarly, her religious education teacher at school was disinterested in exploring spirituality, and only interested in imparting historical information in a narrow format. Ngala Nor’dzin’s interest and involvement in the Church waned towards the end of her teenage years because of this, and her spiritual quest became more internalised.

Ngala Nor’dzin comments:
I always felt that my life would have a strong spiritual aspect, but at that time I was at a loss as to how to express the sense of devotion I felt and my need for a spiritual direction. I read a great deal including a lot of science fiction and fantasy books, as well as specifically spiritual books. Buddhism was the path to which I kept returning.

Her move towards engaging with the path of Buddhism was precipitated by her father’s death:
I found myself unable to come to terms with the trauma of his sudden and dramatic death, and the distress of my mother. I felt lost and insecure. I could find no peace within myself and was aware that I was in danger of becoming mentally vulnerable.

Ngala Nor’dzin visited a Buddhist centre, started practising regularly, attending tsog’khorlo feasts and, entering short solitary retreats. A couple of years later, having adventitiously moved into an apartment in the adjoining house, she met Ngak’chang Rinpoche and Khandro Déchen, and discovered the go-kar-chang-lo’i dé.  At last my path became clear.