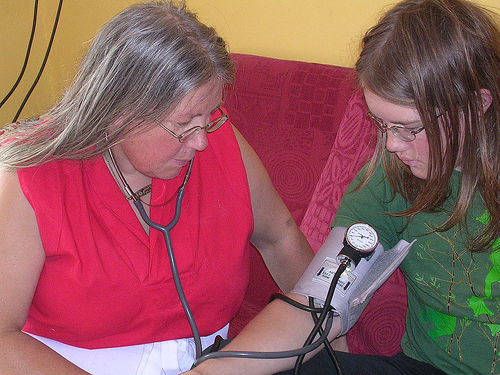 Ngala Nor’dzin Pamo has been involved with healing for many years. Having trained in homœopathy, reflexology and hypnotherapy, it was a natural progression for her to begin practising pulse diagnosis according to the system of Jomo Chhi’mèd Pema which has been handed down through the lineage of the Aro gTér tradition.

Pulse diagnosis is an integral part of Tibetan Medicine (gSo ba rig pa), which is one of the world’s oldest surviving medical traditions. Tibetan medicine, the science of healing, is primarily an oral and textual tradition, with knowledge and practice transmitted from teacher to pupil. The philosophical basis of Tibetan medicine is rooted in Buddhism. The historical Buddha Shakyamuni, sometimes called the Supreme Physician, is said to have taught a healing system in India during the 6th century BC. In many of his teachings the Buddha Shakyamuni used disease and healing as metaphors to illustrate his understanding of the human condition. From the Buddhist perspective, physical illness is inextricably bound with mental, social and spiritual illness. Thus the Buddhist medical system is more than the study of anatomy and physiopathology. It is a guide to ‘right living’ as taught in the Four Noble Truths, and hence involves the spiritual aspects of healing as well as the physical.

Tibetan medicine views illness as the result of imbalances in the biological rhythm, and when examining a patient the practitioner begins by assessing the patient’s constitution. This examination includes observing the patient, making inquiries, and pulse-taking. In Tibetan medicine the arts of pulse reading provide an invaluable source of information, because the pulse is like a messenger between the doctor and the patient. Tibetan medicine aims to keep the Nyipa sum in balance. These are wind (rLung), bile (mKhris pa), and phlegm (bad kan). The long-term causative factors of Nyipa sum are understood to be the three primary misconceptions of attraction, aversion and indifference, demonstrating the close connection between Tibetan medicine and Buddhist method and practice.

In the Aro Lineage system of pulse diagnosis, imbalance at the elemental level is assessed through listening to the elemental quality of the sound of the pulse. This practice requires a great deal of experience in the elements, and an understanding of how elemental imbalance can manifest as physical, emotional and mental symptoms. The practitioner listens to the brachial pulse through a stethoscope placed under an inflated sphygmomanometer. This is illustrated in this photograph of Ngala Nor’dzin listening to the pulse in her younger son’s right arm. In Tibet, practitioners used a tourniquet and a yak horn. The pulses are listened to in both arms. The interpretation of the relationship between the two pulses refers to the rTsa rLung system – in particular to the orientation of the solar and lunar channels. One pulse is diagnosed as the increased pulse which corresponds to the lunar channel, the male or active channel.  The other is diagnosed as the decreased pulse, which corresponds to the solar channel, the female or receptive channel.  These channels are on different sides of the body in men and women.  The lunar channel is on the left in women and on the right in men.

The difference in sound of the five elemental pulses is both subtle and obvious – subtle in that the differences are slight and can be found to be imperceptible by some people, and obvious in that they are distinct and clear as their element if discerned by a practitioner proficient in element practice. For the patient, the experience is similar to having one’s blood pressure taken, except that the pressure in the sphygmomanometer only needs to be as high as required to hear the pulse clearly.  When both the increasing and decreasing pulse has been diagnosed, advice on diet and lifestyle can be given based on the interpretation of the elemental balance between the pulses.  Elemental pills may also be prescribed.  These are taken at a particular time of day depending on the element.

Elemental pulse diagnosis is particularly useful on retreats, when practitioners may be experiencing sudden, or unusual symptoms through engaging in a great deal of practice.  It can also be used to assist orthodox and alternative medicine in helping bring a patient’s health back to balance.  Aro pulse diagnosis is unusual in addressing lifestyle and dietary causes of imbalance.  In the modern Western world it is often thought that the requirements of a human organism to be healthy are quite finite and specific – although the view of these specifics may vary depending on the view of science, on government guidelines or the latest detoxifying fad or diet.  In fact, elemental pulse diagnosis reveals that the needs of our bodies are in fact rather individual, and it is dangerous to adopt a generic approach to our health.  Some people thrive on a vegetarian diet whilst others become weak and lacking in fire energy. Some people thrive on red meat whilst others become congested and overheated on fire energy.  Some people shine with health on a diet of salads and raw vegetables, whilst others find their energy depleted by too much water element. A particular style of eating may suit us at one time in our lives, but need to be adjusted at another stage.  Although pulse diagnosis may disclose particular trends in individuals – a tendency to be deficient in one element, or for another to be too predominant – these states are not fixed, and will fluctuate depending on lifestyle and age.

Occasionally the pulses are difficult to hear or it is unclear how to interpret the result. Then an alternative method can be used to clarify the diagnosis. Traditionally this would involve two stones that resonate with one another when tapped together to produce a vibration, but Ngala Nor’dzin uses a medical tuning fork.  The tuning fork is struck and placed on the patient’s head in particular places. The patient is then asked to report where the sound can be heard or the vibration felt. This can be quite a startling experience. People are often surprised at how clearly the sound is heard or felt in an extremely specific area of the head. The results of this analysis can clarify the element that needs to be the focus of treatment, so that advice and treatment can be given in the usual way. Ngala Nor’dzin received transmission of the Jomo Chhi’mèd Pema’s method of listening and interpreting the elemental pulses from Ngak’chang Rinpoche.