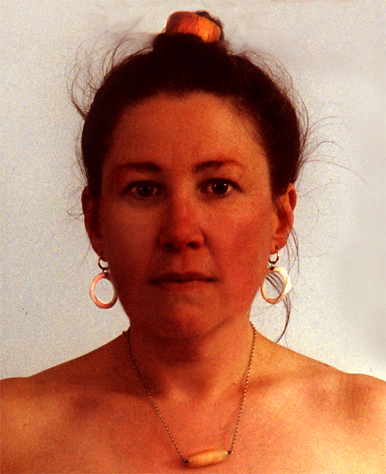 This photograph of Ngala Nor’dzin Pamo was taken in the Summer of 1997 on retreat in Penarth, South Wales. She is one of the Aro Lamas and holds several important rôles within the Aro gTér lineage. Ngala Nor’dzin Pamo and her sang-yab Ngala ’ö-Dzin Tridral are responsible for the third Aro sangha to develop. Ngala Nor’dzin was Ngak’chang Rinpoche’s first student, and has been primarily responsible for the evolution of Sang-ngak-chö-dzong and the apprenticeship programme – especially in its inception. She is a skilled sKu-mNyé teacher who has worked closely with Khandro Déchen on the detailed descriptions of the first series of 35 sKu-mNyé exercises – and she teaches the system on a weekly basis in Cardiff.

This photograph was taken by Khandro Déchen during the sKu-mNyé demonstrations on the ordained retreat in Penarth when the entire first series of 35 Aro gTér sKu-mNyé were taught.

Ngak’chang Rinpoche says of this photograph:
It depicts Ngala Nor’dzin Pamo’s presence admirably in terms of her warmth and clarity, and I hope to see it on the cover of her book (http://www.spacious-passion.org) once it is finished being written. Ngala Nor’dzin Pamo has much to offer to people in the West who have perhaps not previously encountered such a kind, approachable, and luminous icon of femininity in a teacher.