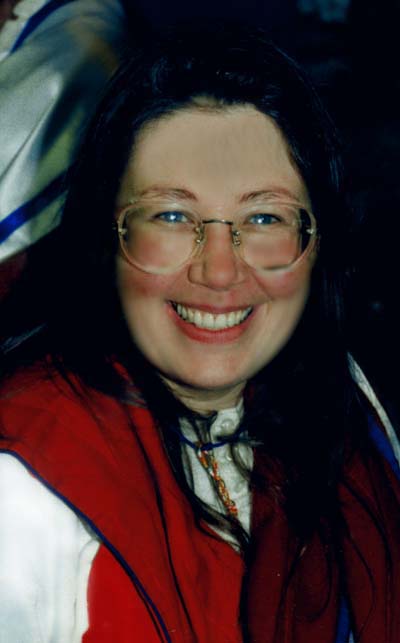 This picture was taken in 1994 on the occasion of Ngakma Shardröl Du-nyam Wangmo’s ordination into the gö-kar chang-lo’i dé (gos dKar lCang loi de). Ngala Nor’dzin was the first apprentice of Ngak’chang Rinpoche and Khandro Déchen to be ordained. She has been primarily instrumental, with her husband Ngala ’ö-Dzin, in the establishment of Sang-ngak-chö-dzong as a registered charity in Britain.

Ngala Nor’dzin and Ngala ’ö-Dzin are good friends of Ngakma Shardröl Du-nyam Wangmo as is Ralzhig Pema Legden. Ngala Shardröl teaches in the USA where she has her own sangha of apprentices. She also teaches as a Guest Lama on the apprentice retreats of the Aro Lamas.

Consequent to Ngala Nor’dzin’s ordination, she participated in the symbolic preparations for ordination ceremonies of several other apprentices and continues to do so today – often being the vajra dance partner of male apprentices being ordained.

Ngala Nor’dzin is known for her warmth and kindness, and for her modest down to earth presentation. She has a talent for relating the teachings to the human domestic situation and to aspects of life which make practical sense to those who are fully involved in careers and parenthood.

Ngak’chang Rinpoche says of her:
Ngala Nor’dzin speaks from her heart and relies on the solid stable commitment she has exhibited for over twenty years. Khandro Déchen and I are not impressed by people who show extreme types of commitment for a year or two and then drift away or become deranged by some sense of personal grandiosity. Ngala Nor’dzin is cast more in the mould of the Tibetan yogini – someone who lives her practice and her understanding, without the need for neurotic intensity of desire for fame. She understands people in the poignant physicality of their everyday home environments, and so those who work with her, and her remarkably genuine husband Ngala ’ö-Dzin, find no space for fantasy and the spiritualisation of their neuroses. Khandro Déhen and I have observed with great joy the respect with which Ngala Nor’dzin and Ngala ’ö-Dzin are accorded by their apprentices, and look forward to each stage in the growth of their kyil’khor of apprentices.