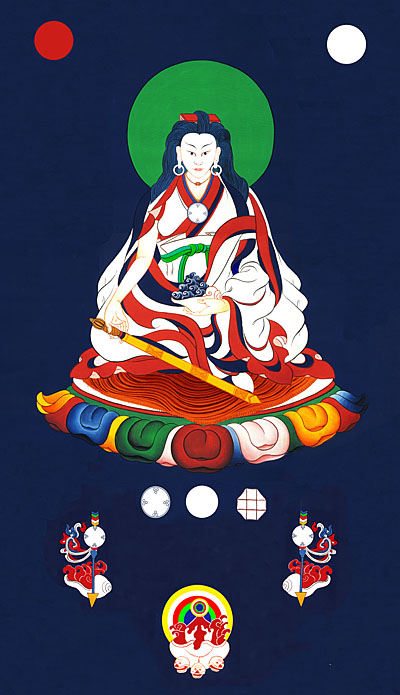 Khandro Déchen comments:
Khandro Chö-ying Nyima ’ö-Zér was the previous re-birth of Ngala ’ö-Dzin Tridral, and in this life he retains her computing skills – although employing them to different ends. In this past life, he was one of the five adoptive mothers of Aro Yeshé. This thangka was painted in Nepal in a simple style with no background. Khandro Chö-ying Nyima ’ö-Zér is either shown in this style or in a landscape surrounded by the astrological animals. She is also shown holding her sword in the mudra of Jampalyang – raised in the air above her head.

Ngala ’ö-Dzin Tridral comments:
Khandro Chö-ying Nyima ’ö-Zér was the daughter of a Tibetan father – a Khamba – and Chinese mother. Her father was an astrologer who was connected to various local princes and he taught his daughter the science of astrology according to both the Chinese and Tibetan systems. She was said to have learnt astrology with relative ease as she was good with figures and had a lively interest in the complex computations involved.

In her left hand Khandro Chö-ying Nyima ’ö-Zér holds a conch brimming with a lake of wisdom water. In her right hand she holds the sword of wisdom. She wears a book-style takdröl in her hair and wears a yeshé mélong (ye shes me long – wisdom mirror) at her heart.