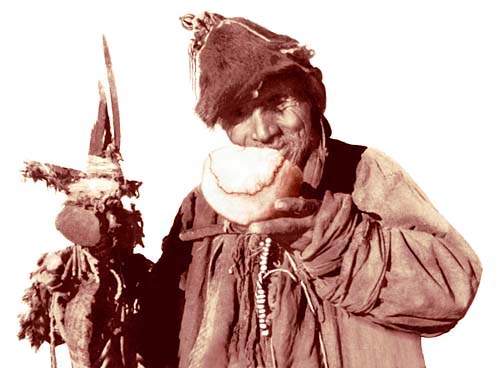 This photograph shows a village ngakpa carrying a skull bowl and a khatvangha. He wears a fur hat crowned with a nine pronged vajra.

Ngakpa ’ö-Dzin Tridral comments:
The term ‘village ngakpa’ is often used in a derogatory manner when scholars are attempting to define the gö kar chang-lo’i dé as a small number of high ranking Lamas who were the exception rather than the rule as regards the dominant monastic culture. It is certainly true that there were many ‘village ngakpas’ and ‘village ngakmas’, and that a percentage of these practitioners may have been lacking in education and great spiritual insight – however, many monks and nuns could have been similarly described. It is interesting to note that there are not generic terms of disparagement for low level monks and nuns – although many monks in the large monasteries were little more than menial functionaries. There were the famous dob-dobs – the police monks, and with them were the cooks, cleaners, and other monastically garbed workers who kept the huge monastic cities running. There were monk traders and monks who attended to the finances of the monasteries, with regard to the garnering and cataloguing of offerings and the collection of land tithes from local farmers who rented monastery lands. From this description of the broad range of monastic inhabitants, we can see that not every monk or nun was a highly evolved spiritual aspirant. The same applied, perhaps actually to a far lesser degree amongst the members of the gö kar chang-lo’i dé. Most of the reason for the disparagement of ‘village ngakpas’ was based on the emphasis on shamanic work carried out by such ngakpas and ngakmas in terms of the help they gave to the local populace – such as divination, weather control, the making of amulets and many other shamanic services. It should be noted in this respect, that these shamanic rites were not unknown in the monastic setting – almost every Lama possessed the ability to practice some form of divination and to make amulets. The term village ngakpa therefore should be understood to apply to a simple local and probably humble practitioner of the Vajrayana who lived as a family person and rendered service to his or her community.