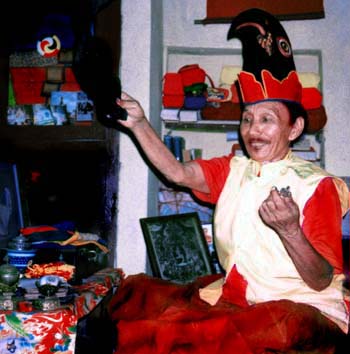 This photograph shows a Nyingma ngakpa (sNgags pa) practising a Za Rahula rite. He is wearing a hat particular to Za Rahula – a lotus hat from which rises the beak of the raven which surmounts Za Rahula’s head. The depicted eye on the central black sections of the hat symbolises the many eyes of Za Rahula – the vision from which nothing escapes.

Protector practice is an important aspect of the practice of many ngakpas and ngakmas – although it is not as central to the Aro gTér as it is to lineages which emphasise Mahayoga. There is a Za Rahula hat within the Aro gTér system which is similar to the Dorje Phurba hat. It has the eyes of Rahula but not the beak of the raven.