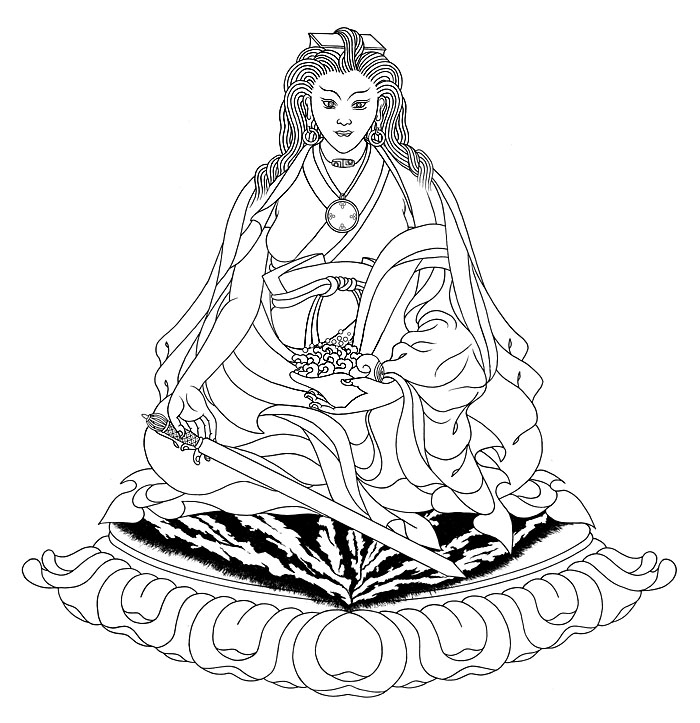 Khandro Chö-ying Nyima ’ö-Zér was the daughter of a Tibetan father and Chinese mother. Her father was an astrologer who was tenuously connected to various wealthy families. Khandro Chö-ying Nyima ’ö-Zér was brought up in Amdo where she became the consort of a wealthy Sakya Lama called Rinchen Gyaltsen Rinpoche. As he was relatively elderly, she became a widow quite early in life. She had no children – neither did she have brothers or sisters; so as both her parents had died her future was decided by the Lama’s relatives who deemed that she was not entitled to any kind of living annuity from his estate. Rather than accepting poor lodgings and becoming little more than a family servant, she decided to leave the district and live as a wandering practitioner. As the consort of Rinchen Gyaltsen Rinpoche she had received many empowerments and details of practice. She was a devout woman who had plunged herself into practice partially as the result of her disappointment in not being able to have children. On her travels she met various Lamas and wandering practitioners – one of whom was Ngakpa Dawa Ngödrüp who she eventually married. She became a strong practitioner of Tsogyel Tröllö and the Tsogyel manifestations of Drölma.

She is depicted, holding a conch brimming with blue ocean water in her left hand, and a sword in her right hand. She wears a book-style takdröl in her hair and wears a mélong at her heart centre.