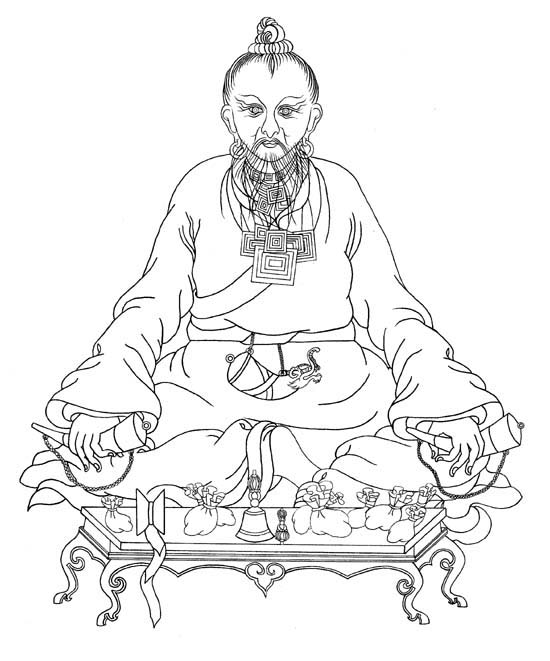 Ngakpa Dawa Ngödrüp was a herbalist who specialised in the arts of diagnosis and the making of medicines. He had a collection of ngakrus—mantra horns—in which he potentiated medicines. He showed Aro Yeshé how to use ngakrus and ways in which they should be made. He made four special ngakrus (sNgags ru) that he presented to Aro Yeshé on the instruction of Aro Lingma. One of these he used a great deal – it was a ‘ra-dzab’ ngakru, which was made from the horn of a drong – a large wild yak. ‘ra-dzab’ is a special material – which turns black on contact with poison. Ngakpa Dawa Ngödrüp wandered widely throughout the mountains of Southern Tibet and Nepal gathering herbs. He was a short heavily built man who recited mantra almost continuously. Ngakpa Dawa Ngödrüp wore a black chuba, and was festooned with amulets. He wore an ivory ring in his hair that had been given to him by Aro Yeshé, who found it after a dream in which he had seen it lying in the river. Aro Yeshé went to the river and found it in the exact place he had seen in his dream. He retrieved it and gave it to Ngakpa Dawa Ngödrüp who wore it continuously from that day on. This ivory ring is now worn by the rebirth of Ngakpa Dawa Ngödrüp – Ngakma Nor’dzin Pamo. It was returned to her by Ngak’chang Rinpoche and Khandro Déchen in 1997. Aro Yeshé told Ngakpa Dawa Ngödrüp that the ivory ring would help him with his diagnosis and with his skill with potentiating medicines. He had thin head hair and a long sparse beard. He was a practitioner of Ögyen Menlha yab-yum, Tsogyel Mendrüp Lhamo, and of Lama’i Naljor of Aro Lingma.