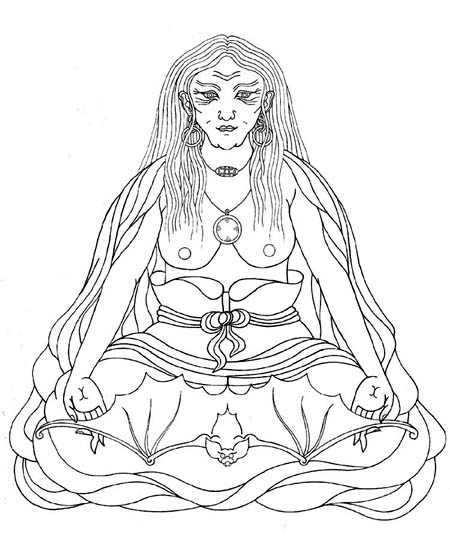 Khandro Rig’dzin had become a nun after her husband and child were killed by a red bear in the wilds of Golok. After her husband and son were mauled by the bear she was left for dead. Her severe chest wounds left the travelling party to assume that she would not survive and they decided to abandon her with meagre shelter and provisions. After some days she was found and brought back to health by a party of travelling practitioners one of whom was well versed in herbal medicine. The party remained with her until her recovery, and as she recovered, they instructed her in the practice of gÇod. Once she was able to walk again they travelled slowly North into Golok where they introduced her to several Lamas. She was ordained by Golok Rig’dzin Jig’mèd who gave her the name Pema Rig’dzin. At his advice she took up the life of a mendicant gÇodma and wandered in Kham and Golok practising either by herself or with others, until she met with Aro Lingma and her company travelling out of Southern Golok.

On the advice of the four year old Aro Yeshé, she grew her hair and adopted gö-kar-chang-lo dress. Her name then became Ngakma Rig’dzin Pema, and later (on becoming one of the five mothers) Khandro Rig’dzin Gong-tsal Takmo. She was called ‘Takmo’ or tigress by the young Aro Yeshé as a pet name because of her facial hair, but she adopted the name because of her great fondness for Aro Yeshé. Khandro Rig’dzin Takmo took care of him most in terms of cooking and washing his clothes. She taught him vajra melodies of mantras. Khandro Rig’dzin Takmo never took a consort but grew her hair and lived as a Ngakma. She was exemplary in her singing of yogic songs and had a sweet powerful voice. She had considerable power as a healer, and was a strong practitioner of Dorje Phurba, Ga’phong Dongma, Seng-gé Dongma, and the trinity of subjugation (Chana Dorje, rTam-drin, and Khyung).