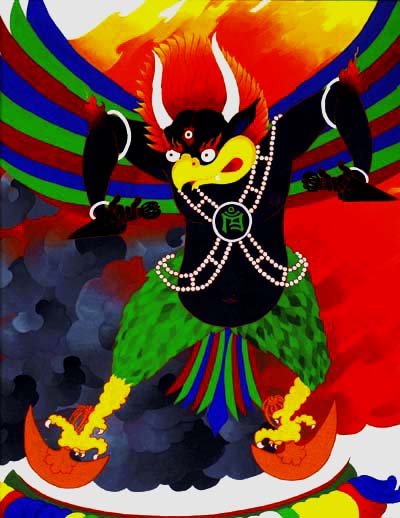 Ögyen Garuda is Padmakara in the form of the immense space eagle who is born fully enlightened and in full flight. His furious gaze burns away the fabric of duality for all beings, conditions, and situations. His brilliant blue complexion reflects his spacious intelligence and the vast expanse of Dharmata. His hair is a roaring mass of wisdom-fire which scorches the perceptual distortions of monism, dualism, nihilism, and eternalism. His two meteorite iron horns impale the deluded division of samsara and nirvana. His golden razor beak bites through every dualistic contrivance, and his two wings bear him beyond the limited spaces of existence and non-existence. The nine-fold pinions of his razor wings liberate beings in the temporal spaces of the nine bardos. He wears the human bone ornaments which display the spatial essence of the six classes of Vajrayana. At the centre of his chest ornament is the luminous green ‘Trom’ which illuminates the universe and makes total collision with reality inescapable.

In each hand he holds a nine-pronged meteorite iron phurba. These two phurbas liberate the potential of the solar and lunar channels and overpower all apparent phenomena in empty rage. With his two phurbas he stabs attraction, aversion, and indifference as they pertain to clinging either to samsara or nirvana. In each claw he holds a nine-pronged beryllium copper grigug. These two grigugs slash the fabric of dualistic clinging in every dimension of existence simultaneously – without need of moving from the vast single point of awareness.