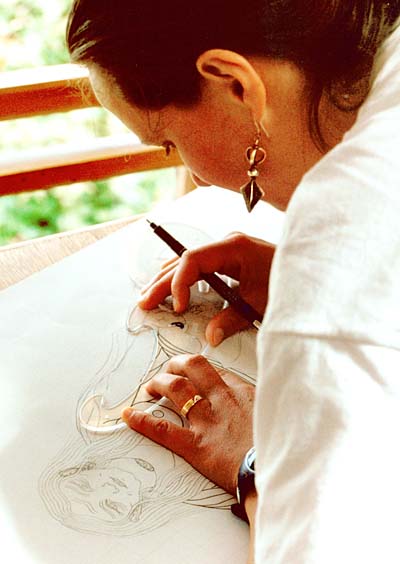 To live the full-blooded life of a tantrika – that is my guiding principle. I try to remember it all the time – not only in the context of being a thangka painting student, but in every aspect of life.

I came in contact with the Nyingma tradition early in the 1990s. I first met Ngak’chang Rinpoche on a course in Vienna. (I met Khandro Déchen a year later when she came to stay at our house when she and Ngak’chang Rinpoche were teaching in Austria.) The subject of that weekend course was namkha and the five elements. I felt so touched by the teaching on the five elements, and by the two Lamas, that I spontaneously asked for an interview. For me—having been rather shy at this time—that was somehow courageous. After our discussion I knew that I found my home in the Vajrayana world and after a few weeks I became an apprentice.

When I started my vocation as a thangka painter a few years ago it was not so easy – as I had not touched a pencil or paint brush since I was a child. I had no special training for painting or drawing – just the average art classes at school. I remember that there was a time when I liked to draw flowers, especially roses. Then there was ‘a change in my interests’ and I painted trees with the dark blue sky and a moon in different phases as the backgrounds to the trees. But at the beginning of my thangka painting training – the little girl who liked to draw was dead. Ngak’chang Rinpoche and Khandro Déchen, however, brought her back to life again and showed her fundamentals – how to move the pencil with passion, how to trace with passion, how to increase the size of a drawing with passion (if one doesn’t have a Xerox machine) and how to use curves and rulers with passion – as support for reaching perfection of line.

I am thankful to Khandro Déchen for that transmission – and to Ngak’chang Rinpoche for telling me that:
The perfect line requires precision and passion.

The prerequisite for a thangka is a perfect line drawing. That is the most difficult aspect in the process – at least for me. One needs to know how certain iconographic forms should appear, how to proportion them correctly, and how a body looks in terms of the unique hybrid anatomy which allows iconography to be subtly informed by naturalism.

Khandro Déchen always says:
The finished drawing simply has to look right from the point of view of iconography and anatomy. These two considerations must not damage each other.

Khandro Déchen advised me to go to a life drawing class to practise drawing, and to learn eye-hand coordination. Ngak’chang Rinpoche spent a good proportion of his time at art college engaged in life-drawing and said the experience has been invaluable in terms of thangka painting. He said that he had seen a number of Western thangka painters who lacked drawing skills, and that—due to the relatively short duration of training in comparison with ethnically indigenous trans-Himalayan painters—they lacked the ability to produce convincing iconography. Ngak’chang Rinpoche mentions that notwithstanding his lack of acquaintance with Western thangka painters he would cite Glen Eddy as the only one for whom he has genuine admiration.

Ngak’chang Rinpoche told me:
One of the major difficulties—even for Tibetan thangka painters—would seem to be the eyes of the wrathful awareness beings.  They are not merely cross-eyed. Their eyes are held in a tension, which communicates the total clear rage of the non-dual state. It is difficult to skew the eyes correctly to achieve that result and few painters manage it. If the eyes are not in exactly the right angle of distortion, then the effect is one of depression, confusion, or absurdity. One really has to know what one is painting, and ‘near enough’ is remote in respect of ‘good enough’.

I noticed that being a physiotherapist and knowing about anatomy can be an obstacle in terms of an intuitive understanding of iconographic forms. Also – anatomical knowledge and clear observation of the naked body can be completely different. There is art and there is medical anatomical drawing. Hand-eye coordination is the basic training for a thangka painting student. For me this life drawing was and still is extremely helpful.

Patience is also essential and in developing it, I have found that improvement is possible – as the years go by. It is a matter of practice and inspiration – as always… One has to be inspired by the process of how the yidam or Lama ‘comes to life’ on the page. And by the colours, the play of the five elements… One also has to stick to the process like Lokuom to the teeth… (Lokuom is a Turkish speciality, which is extremely sweet and sticky.)

Ngak’chang Rinpoche and Khandro Déchen visited my home at Anxiety Rock. They came to preside over the Vajrayana Crafts Retreat. I received the main part of my training during these retreats. Once Ngak’chang Rinpoche gave me a rather special present. He smashed a champagne bottle and prepared one shard of the broken glass for me on our grindstone. One needs an implement such as this for polishing the canvas of a thangka before commencing to paint. Ngak’chang Rinpoche worked on this shard of glass for some time, to make it smooth enough for my use, and explained to me that in Tibet a piece of conch would have been used for that purpose. This was so inspiring, overwhelming, simply breathtaking for me, because I was just at the beginning of my training. At that time I thought it would take years before I could start to paint a thangka – but I have found that whenever one thinks like that, one knows at the same time that one can also be close to one’s goal. Things can certainly accelerate around the Lineage Lamas.

So it was that only one year later I started to paint my first thangka. After having accomplished my ‘homework’ (which was a painting of flames with the syllable Khrom), Rinpoche and Khandro Déchen encouraged me to start with the ‘real thing ’ – my first thangka. It was the thangka of ’a-Shul Pema Legden. During one of the craft retreats, Rinpoche helped me to complete a line drawing of ’a-Shul Pema Legden. At the end of that week Ngak’chang Rinpoche and Khandro Déchen showed me how to stretch and prepare a canvas, which was most exciting. When they left I could start to paint.

After some weeks I finished the painting and took the thangka with me to visit Ngak’chang Rinpoche and Khandro Déchen in Wales. Khandro Déchen introduced me to the technique of airbrush. I will never forget the moment when we peeled off the masking film which covered the painted areas of the thangka. I could hardly breathe and was very proud of my first efforts and having accomplished my first thangka. After that I painted two others: Ögyen Garuda and Ögyen Ga’wang Dorje – a special form of Padmasambhava.

My life has changed a lot over the last years – I accomplish things which I thought I could never accomplish. Not only have I become a practitioner, thangka painting student, and an ordained naljorma within the gö-kar chang-lo’i dé – but since the year 2000 I instantaneously became mother of a 19-year-old girl. The daughter of my husband decided to live with us, which is delightful. Now we are a little family and my sense of responsibility has grown a lot too.

I have started to work in my former career again. I had given up my career for one year to dedicate my time to thangka painting. Now I work half time. This is quite useful in terms of income—of course—but also in terms of time. Beyond my essential practice, I have time for painting, family, and making occasional short trips to Nepal to visit Kyabjé Künzang Dorje Rinpoche and Jomo Sam’phel in the company of Ngak’chang Rinpoche and Khandro Déchen. On these visits my husband Ngakpa Trögyal Dorje and I are able to purchase brocade for thangkas, phurba robes, and other Vajrayana projects. Ngakpa Trögyal Dorje was chosen by Ngak’chang Rinpoche and Khandro Déchen as the main holder of Dorje Phurba transmission within the Aro gTér and is engaged with many projects in relation to Dorje Phurba – such as the phurba retreat house and constructing a three metre (9 foot) high phurba which will be situated at the side of the phurba dance platform in our garden.

I hope with the help of Ngak’chang Rinpoche and Khandro Déchen to be able to bring more of the Aro gTér yidams into being.