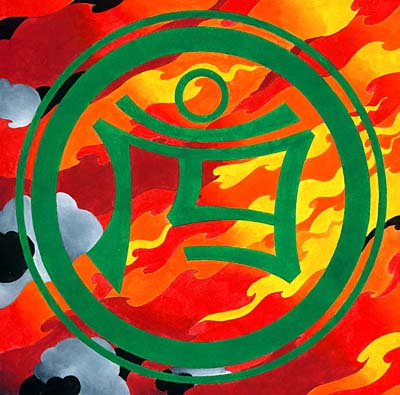 seed syllable of the Garuda

Trom (khrom) is the wrathful seed syllable of the Garuda (Khyung). The syllable shown here was drawn by Ngak’chang Rinpoche, and the syllable has been crafted to conform to a circle. This is one of a series of syllables appearing in circles which Ngak’chang Rinpoche has drawn as part of the creation of male and female sets of cemetery ornaments (ru rGyan) according to the Aro gTér lineage in which yogis wear bone ornaments displaying the five dakinis and yoginis wear ornaments displaying the five dakas. The ‘aprons’ of the bone ornament sets are comprised of disks linked by bone beads, and each disk bears a seed syllable appropriate to either the five dakas or five dakinis. The syllable ‘Trom’ is one of the daka syllables. These ru rGyan are worn by the dakas and dakinis who officiate as the Tsog feasts as well as being worn in a variety of Tantric dances (rDo rJe gar’cham).