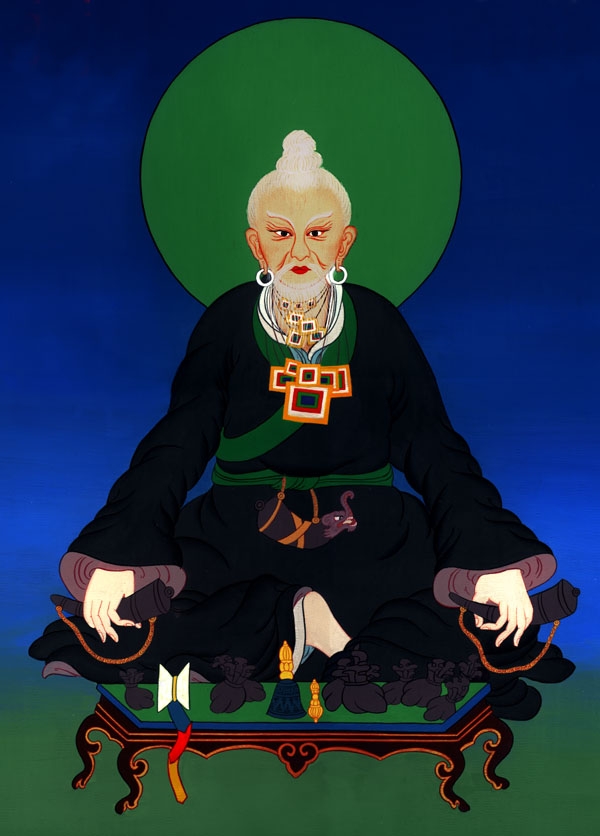 Ngakpa Dawa Ngödrüp wore a black chuba, festooned with many amulets. He wore an ivory ring in his hair that had been given to him by Aro Yeshé, who found it after a dream in which he had seen it lying in a river. Aro Yeshé went to the river and found the ring in the exact place he had seen it in his dream. He retrieved it and gave it to Ngakpa Dawa Ngödrüp who wore it continuously from that day on. Aro Yeshé told him that it would help him with his diagnosis and with his skill with potentiating medicines. He had little head hair but had a long beard.

Ngakpa Dawa Ngödrüp was the previous re-birth of Ngala Nor’dzin Pamo and she wears the ivory ring in her hair that he once wore in his hair. The ivory ring was rediscovered in Zanskar by Ngak’chang Rinpoche when he and Khandro Déchen stayed with students in the Great Charnel Ground near Sa-ni, a Drukpa Kagyüd Gompa which they visited with Kushog Jampal la, the brother of Sé Rinpoche. The ivory ring was found in the sands of the willow grove at the southern end of the Great Charnel Ground where Ngak’chang Rinpoche and Khandro Déchen and their students had pitched their tents.