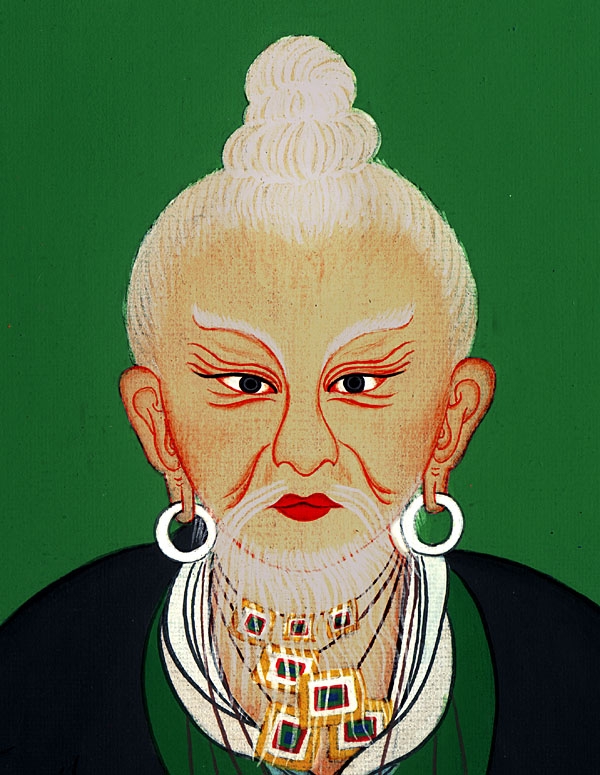 Ngala Nor’dzin Pamo describes two commonly known homoeopathic remedies: drosera and nux vomica. These are derived from the plants sundew (drosera rotundifolia – youth wort, red rot, devil’s ear), and the poison nut tree (strychnos nux vomica):
Sundew is a small insectivorous plant that grows in boggy places in the northern hemisphere. The white flowers that appear in July, are closed in strong sunlight.  The long, fleshy leaves have ear-shaped ends that are hairy and bear sticky pearl-like beads. The insects on which sundew feeds stick to these beads and are then consumed by the plant’s juices. In its natural habitat, it is avoided by animals and is reported as causing coughing in sheep. These are the sort of details that Dawa Ngödrup would have known about the plants he used. The nature and environment of sundew reflects its healing properties. The type of ailments for which drosera is commonly prescribed, are those that may occur from living in the damp conditions in which it grows, such as respiratory and phlegmatic complaints. It is of particular benefit in whooping cough, asthmatic complaints, and bronchitis. As a carnivorous plant, drosera is sensitive to the touch of insects landing upon it, and in medicinal use this sensitivity makes it helpful in coughs caused by the sensation of a tickle in the larynx. Sundew dislikes strong sunlight, and the patient needing drosera may display a sensitivity to light.

The second example Ngala Nor’dzin provides is of the small evergreen poison nut tree which grows in Asia and northern Australia. The Sanskrit name for this is kupilu, and it is an ingredient also used in Tibetan medicine, so Dawa Ngödrüp would have known of it.

Ngala Nor’dzin explains that the bitter-tasting seeds of the fruit contain strychnine, and it is these that are used to make the homoeopathic remedy:
Strychnine poisoning causes sensitivity to noise, light and touch, spasms and stiffness of the body, a severe rise in blood pressure, and convulsions. Severe poisoning will be fatal. The stimulating properties of the seed reflect its ability to be of benefit as a medicine, for over-stimulated and stressed nervous systems, and for keyed-up, irritable, ambitious people who tend to do too much. Its paralysing properties reflect its ability to help when over-stimulation has produced states of collapse, or when the regular balance of the digestive system has become disordered through over-indulgence in stimulants.

Ngala Nor’dzin continues:
Nux vomica type patients are better in a moist atmosphere and cannot cope with drafts and getting chilled, which corresponds to the tree’s preference for a hot dry climate.

These examples demonstrate how an understanding of the nature and environment of a herb can lead to an insight into its potential benefit as a medicine. Dawa Ngödrüp was an expert at observing and understanding the nature and properties of healing herbs. He was also an expert in diagnosis and would have known how to match the properties of herbs to the symptoms he observed. These skills, combined with practice of the elements, pulse diagnosis, as well as his practice as a ngakpa, made him a valuable member of the Aro Gar. He helped with the health problems of the inhabitants of the area and their livestock. Dawa Ngödrup owned several ngakrus. Rilbus are placed in these medicine horns to facilitate potentialisation through mantra and ritual practice. Dawa Ngödrüp also made protection amulets potentialised through mantra and ritual practice. These are folded squares of paper with mantras inscribed on them, sealed and enclosed by woven threads. The threads are woven in extremely intricate patterns of the five elemental colours, or in red, white and blue. The painting of Dawa Ngödrüp shows him wearing many of these amulets around his neck.