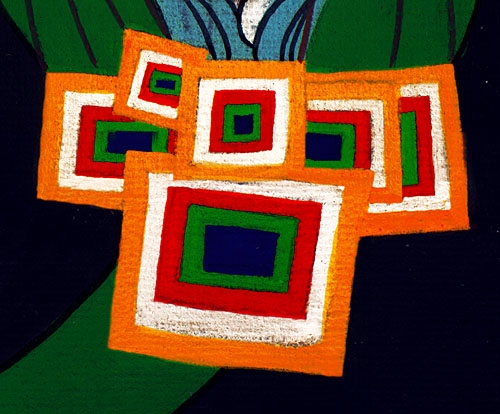 amulet-making as a ritual practice

In this close-up of Ngakpa Dawa Ngödrüp we can clearly see the amulets that he wears around his neck. Making these amulets was one of the ritual practices he would have performed for the Gar. The amulets would have been for protection or for the promotion of better health. Amulets are made of  thick, hand-made paper, folded into a square and sealed closed with woven threads. Inscribed or printed on the paper are particular amulet insignia and mantras. Sometimes amulets also contain herbs. The threads are woven in intricate designs of the five elemental colours: yellow, white, red, green and blue; or of the three colours of the central, lunar and solar channels: blue, white and red. Often sets of five threads are used in elemental colour weaves, to deepen the significance of the symbolism. In this picture, a simple kyil’khor style of weave has been used. Mantra is recited throughout the creation of the amulet.

Ngala Nor’dzin was given two amulets by Ngak’chang Rinpoche in 1999.  She was delighted and fascinated with these beautiful artefacts, but did not start to make them them herself until recently. Ngala Nor’dzin said:
I had thought that the amulets would be extremely difficult to make. They looked so intricate and complicated.  I wondered how the threads were secured and finished off, and the paper folded.

When one of the apprentices of Ngala Nor’dzin and Ngala ’ö-Dzin was experiencing challenging life circumstances, she decided to make several amulets for her.
I was amazed that when I actually started to make the amulets – it was as if I was remembering an old craft.  All the difficulties I had foreseen melted away, and the intricate and detailed patterns proved to be straightforward.

Ngala Nor’dzin now hopes to make the creation of amulets a regular part of her ritual practice, under the guidance of Ngak’chang Rinpoche and Khandro Déchen.