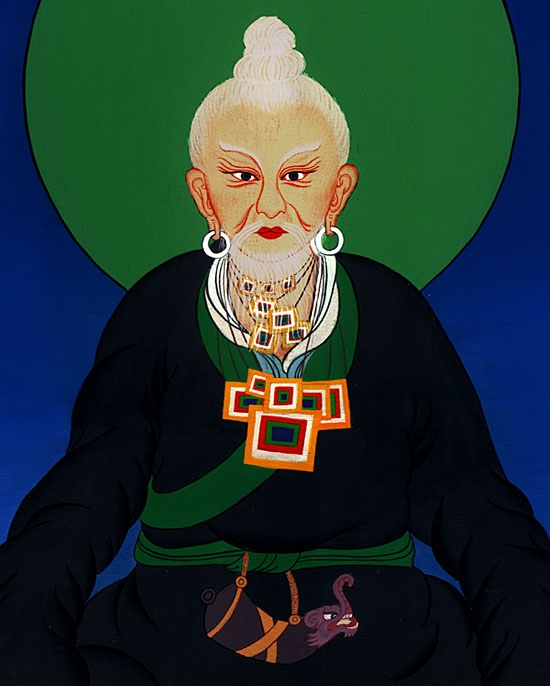 Dawa Ngödrüp was an herbalist and a ngakpa at the Aro Gar. His practice revolved around the healing arts and would have included ritual practice as well as the administration of herbal medicine. Dawa Ngödrup’s wife, Chöying Nyima, used to accompany him on some of his expeditions to gather herbs. As a childless couple, they were able to dedicate their lives to practice. Dawa Ngödrüp made several expeditions a year into different parts of the locality in order to find and harvest the plants he needed. Sometimes he was away from the Gar for weeks at a time, and some of his journeys  proved difficult or treacherous in order to reach the plants he needed at the times of year in which they should be gathered. The final form of the remedies Dawa Ngödrüp created were the spherical rilbus with which we are familiar as Tibetan medicine today.

Dawa Ngödrüp collected and prepared the majority of the herbs he used, rather than obtaining them by trade. It was therefore essential for him to know the particular places to find specific herbs. For herbal remedies, either the flower, the leaves, the sap, the seed, the roots, or the whole plant might be used. He also used combinations of various herbs in his preparations. Dawa Ngödrüp knew his herbs in an intimate manner with regard to their nature, needs and application. He knew the places where particular herbs flourished, the time of year in which they flowered, the type of soil they liked and the problems they were likely to suffer in terms of disease or insect attack. Herbs needed to be gathered at a certain time of the year, particularly if only a part of the herb was required, such as the flower or the seed, so the pattern of Dawa Ngödrup’s life would have revolved around the growth patterns of the herbs he used. As well as this, some herbs needed to be gathered under particular weather conditions, such as a flower when fully open in full sunlight, in order to make the most advantage of the medicinal part of the plant. According to The Tibetan Art of Healing, leaves, sap and shoots were gathered in the rainy season, whilst the flowers and fruits were collected in the autumn. This book notes that plants found to grow in more than one place had properties to benefit different ailments. For instance, the tips of aconite growing in shade would be of benefit to ailments of heat, whilst the roots of a plant grown in full sun would be of benefit to cold diseases.