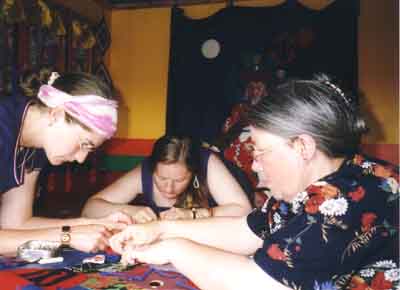 Craft work is one of the many central activities of Tantric practice and teaching. In the Aro gTér gö kar chang lo Lineage practitioners take artistic involvement and expression as being central to their lives. Craftwork including appliqué and the making of covers for musical instruments, are activities in which individuals become intensely involved.

Apprentices may be complete novices or they may be the almost professional. Levels of skill and excellence are not indications of ability or involvement, however, simply willingness to be part of a growing project. Committed individual involvement is one factor that made the appliqué retreat a great success.

The idea of the Yeshé Tsogyel appliqué came from Ngala Nor’dzin Pamo. The activities of her apprentices during the retreat show their devotion to her inspiration. Their involvement is one of love and intense devotion integrated with everyday individual desires and aspirations.