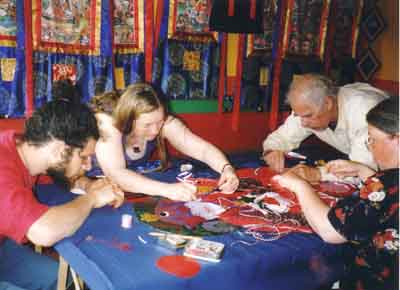 Such was the involvement in the appliqué project that apprentices were quite transformed by the event. Here follow some comments made by apprentices:

It was as if Yeshé Tsogyel evolved, organically and became present while we were working.

Yeshé Tsogyel was with us throughout the retreat. All the while we were sewing intricate pieces of material together, it was as though she was there, present with us and encouraging us in our practice.

This is the first time that I feel I have really understood something about the intimate nature of craft as practice. Before, it had always been quite enjoyable and a break from formal practice, but now I feel I understand the relation of creating thangkas and making our own practice equipment in a different way: as though as tantrikas, we are bringing our world into being in the same way that we allow the envisionment of an awareness being to arise as we practice.

We were most fortunate to have been given a quantity of fabric collected over twenty years by Ngak’chang Rinpoche and Khandro Déchen. It was our intention to create an appliqué of the same size and style as the appliqué of Padmasambhava, created several years earlier by members of Ngak’chang Rinpoche and Khandro Déchen’s sangha. We were delighted to find pieces of the same fabric they had used, and that we could now use for Yeshé Tsogyel.