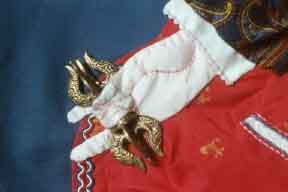 The Dorje held by Yeshé Tsogyel

Retreatants rose early for morning practice, and then enjoyed a full and generous breakfast prepared by Ngakpa Samten, the retreat cook, so that lunch could be skipped and work continue through until the evening. Ngakpa Samten also undertook several non-sewing tasks connected with the appliqué. One of these was to cut a small dorje in half and remove some of its mass, so that it was not too heavy for the appliqué. It is held byYeshé Tsogyel.

Despite the immensity of the task of creating the appliqué in a week, we were able to spend a couple of hours in the evenings relaxing together, when the light was too poor to sew. We also had a horse-riding expedition on Caerphilly mountain one afternoon, and on the final day visited the beach where Kyabjé Chhi’mèd Rig’dzin Rinpoche controlled the weather.

Although the retreat centred upon the craftwork, several other projects grew and existed alongside, so that the sense of the whole week was one of creativity and expression. It was remarkable, the way that these projects grew organically and interwove themselves with each other. Ngala Nor’dzin and Ngala ’ö-Dzin were interviewed and these interviews were transcribed and extracts of each included in the text for our new apprenticeship booklet, worked on by Ngakpa Zhal’mèd and Naljorma Rin’dzin.

The whole process of making the appliqué turned into an opportunity for teaching and transmission. As one apprentice said:
We had the opportunity to ask many questions, and discuss a great deal of teaching and practice material.

It was a hot week and the intensity of the weather outside seemed to match the concentration of work and the focused atmosphere. The group seemed to develop its own natural ebb and flow. Individuals would occasionally sit quietly practising mantra or have a spontaneous sKu-mNyé session in the garden, to break from the intensity of sewing, but without dissipating the atmosphere of the retreat.