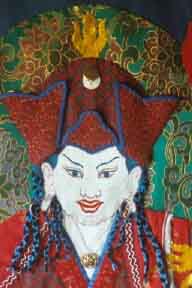 The Face of Yeshé Tsogyel

Apprentices felt that:
It was as if Yeshé Tsogyel evolved, organically and became present while we were working. Yeshé Tsogyel was with us throughout the retreat. All the while we were sewing intricate pieces of material together, it was as though she was there, present with us and encouraging us in our practice.

The face of Yeshé Tsogyel had been embroidered in Nepal. This was organised by Ngak’chang Rinpoche during a pilgrimage to visit Kyabjé Künzang Dorje Rinpoche & Jomo Sam’phel in 2002. The face on the original appliqué of Padmasambhava made in 1995 was embroidered by the apprentices who created it. However a new embroidered face was made in Nepal in 2003 from a painting by a thangka painting student.

Lama Nor’dzin comments:
The face of Yeshé Tsogyel had been embroidered in Nepal to Ngak’chang Rinpoche’s specific design, but we needed to add lengths of hair. Ribbon was plaited and sewn onto the appliqué, which included some strands of hair from Ngak’chang Rinpoche and Khandro Déchen, and from Kyabjé Chhi’mèd Rig’dzin Rinpoche.