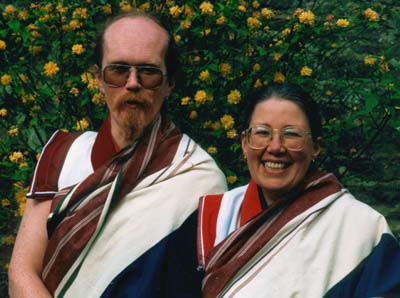 Ngala Nor’dzin laughs when she remembers:
There was a time when I wrote the newsletters by hand, organised all open retreats, and cooked for the retreat attendees. Ngala ’ö-Dzin looked after the mailing list, and was in charge of our first publications. We worked with Ngak’chang Rinpoche closely in those days – making curtains for the shrine room, cooking meals, and preparing for the visits of Lama Yeshé Dorje Rinpoche and Khordong gTérchen Tulku Chhi’mèd Rig’dzin Rinpoche who both came to Cardiff to visit us.

They both still work tirelessly for their own sangha and for the Aro gTér Lineage.

According to the vows of the Khandro Pawo Nyi-da Mélong Gyüd (mKha’ ’gro dPa bo nyi zLa me long rGyud) Ngala Nor’dzin and Ngala ’ö-Dzin take each other as teachers, and find their relationship of great significance in their practice. Their relationship is a manifestation of their lives as practitioners, and a source of inspiration for those who know them. The warmth and friendship they share—together with the relaxed and intimate atmosphere that surrounds them—inspires confidence in their apprentices and even in those who meet them casually. Their sons Daniel and Richard—who were caring, gentle and lively as children—continue to demonstrate consideration, kindness, and cheerfulness through their teenage years.

Ngala ’ö-Dzin comments:
Ngak’chang Rinpoche and Khandro Déchen told us that they have no doubt that the warrior qualities—which Daniel and Richard display—are a direct reflection of how we apply the teachings of the Khandro Pawo Nyi-da Mélong Gyüd as a couple. They regard this teaching as being of great significance to the world. They point out that happy loving parents who evidently trust and respect each other – are going to raise children who will contribute to a happier more loving world.