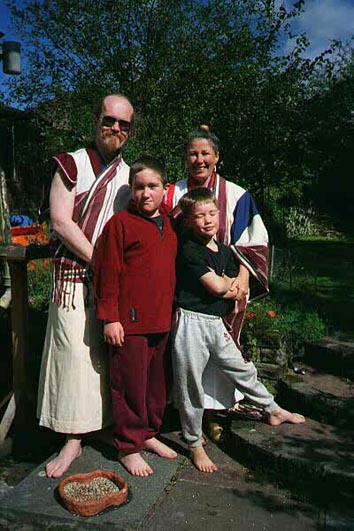 Ngakpa ’ö-Dzin says: Our sons, Daniel and Richard, are happy to welcome visiting Vajrayana practitioners and enjoy these retreats – usually offering one or both of their bedrooms for visitors to use.

The largest upstairs room has been furbished and decorated in the style of a traditional Tibetan shrine room – according to the colour scheme given by His Holiness Düd’jom Rinpoche’s artist Ögyen Tobgyal. Since there are no Aro gTér shrine colours – Ngak’chang Rinpoche and Khandro Déchen advocated the colour scheme recommended by Kyabjé Düd’jom Rinpoche and a dozen such shrine rooms now exist in the countries where the Aro gTér is established. Regular open meetings are also held there.

Ngakma Nor’dzin comments, Our family is a little unusual in some ways for a conservative South Wales suburban enclave. Vajrayana Buddhism is less known in Wales – and otherwise absent in Whitchurch. Our neighbours are friendly and easy-going – tolerant of our ritual music and our vajra dance in the garden. Being a small close of eighteen houses, everyone knows one another. The atmosphere of the close is extraordinarily content and only one house has changed owner in the many years we have been here, and that was only on the death of an elderly lady.

Ngakpa ’ö-Dzin observes: Coincidentally, a BBC television programme called ‘The Lotus and the Leek’ (in which Ngak’chang Rinpoche, Khandro Déchen, and the Cardiff Vajrayana Meditation Group were featured) was screened a week or two after we moved in. This was quite fortunate, because everyone in the close knew we were Vajrayana Buddhists and nothing had to be explained. They were possibly even relieved on meeting us, that we were relatively ordinary people. Ngak’chang Rinpoche and Khandro Déchen have always emphasised the importance of ‘ordinariness’ and of being able to mix well in a broad range of social situations. This does not require blandness or a lacklustre absence of personality … quite the reverse, as Ngak’chang Rinpoche put it ‘it is simply in one’s lack of pretension that one is ordinary or not. One does not have to blend into the sidewalk to be ordinary – one simply needs to be friendly and empty of affectedness.’ Ordinary thus depends on a genuineness with others. It does not require lack of eccentricities – it simply means that one meets everyone squarely, genuinely, and without what Ngak’chang Rinpoche has described as a ‘supercilious, aloof, politically correct, green, ergonomic, bio-degradable Buddhist agenda.’

In 1998 Ngala Nor’dzin and Ngala ’ö-Dzin encountered some serious financial difficulties and were faced with the prospect of having to move to a smaller home. Ngakpa ’ö-Dzin comments:
We did not want to lose our shrine room, and the ability to host retreats. The room was consecrated by Ngak’chang Rinpoche and Khandro Déchen and has a special atmosphere – so after close scrutiny of our finances we realised it was possible to make it work. Ngak’chang Rinpoche told us that he was once advised by Chhi’mèd Rig’dzin Rinpoche that if one relied upon Dharma rather than societal concerns one would never starve – and so we took this to heart and all has worked out well. Having sold our car to cut back on expenses we were eventually given another when we least expected it.