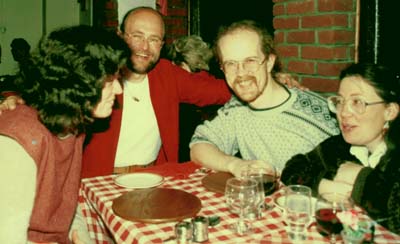 Ngak’chang Rinpoche and Khandro Déchen are particularly fond of the dinner setting as a means of encouraging more oblique entrances to Dzogchen transmission. Ngala Nor’dzin and Ngala ’ö-Dzin often dine with Ngak’chang Rinpoche and Khandro Déchen in order to discuss the evolution of their sangha and questions arising from the dissemination of the teachings.

Ngakma Nor’dzin says of this:
There have been many occasions when we have been laughing and joking together with Ngak’chang Rinpoche and Khandro Déchen – when suddenly the emphasis shifted and we were aware that we were receiving a teaching and the transmission of living the view. The sense of transmission is beyond concept and intellect. On many occasions I have become aware of the atmosphere of a conversation changing. I would sense a stillness of mind, and a sensation at the centre of my body as if a wave of direct communication had passed through me. The recognition of such moments of transmission smoulders within me and, over the years, these experiences have grown into the warmth of continuing devotion, and openness to the potential for transmission of every moment with my Lamas. I have only to think of Ngak’chang Rinpoche and Khandro Déchen or visualise their presence for the warmth of devotion and sense of transmission to flare within me – often causing tears to prick my eyes.

Ngakpa ’ö-Dzin says of this occasion:
I remember one of the first occasions when Ngak’chang Rinpoche turned a joke on its head. It was at the Ziopin restaurant in Roath, Cardiff and Ngak’chang Rinpoche moved from a quip about Sambucha and sambhogakaya to discussing the nature of spirit as both liquid and gas in terms of how it can be ignited. The glass became the mandala. The Sambucha became nirmanakaya in relation to its volatile gas as sambhogakaya, and its flame as the wisdom fire of dharmakaya. It was a simple statement – but in the context of the moment it became transmission, and I understood that being open is more important than having an enormous intellect.