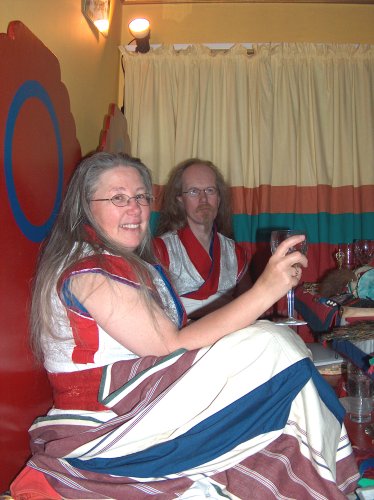 in the shrine room at Aro Khalding Tsang

Ngala Nor’dzin and Ngala ’ö-Dzin are in the shrine room at Aro Khalding Tsang during an apprentice retreat, after giving transmission of ‘Shintu Mélong Zabmo’ – the Profound Lady, Mirror of Ati-yoga, which is why they are wearing their hair loose and flowing without ornamentation in the Dzogchen style.

A Dzogchen informal symbolic transmission, on the other hand, is a spontaneous occurrence or event which can occur at any time and in any place – and is not announced in advance of its being manifested for the benefit of a disciple or disciples.

The personal realisation of one’s own natural, unobscured state of ‘being’ is what is being transmitted by the Lamas to their students during both formal and informal symbolic transmission. The Shintu Mélong Zabmo introduces participants to their realised nature and the knowledge that this is identical to the Mind of the Lama.

Such realisation is spontaneous, uninhibited, and has the expression of limitless openness. The smile of joyful compassion as seen in the expressions of the Lamas and experienced by their students at the time of the empowerment and afterwards, is a communication of this realisation to others. Transmission is an instantaneous, complete and continuous method of Buddhist practice.