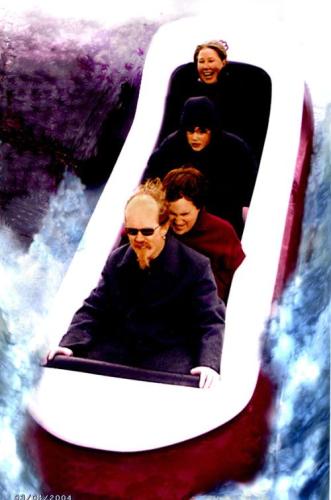 Daniel and Richard often have part of their school holidays taken up with their parents’ teaching schedule, so Ngala Nor’dzin and Ngala ’ö-Dzin are always pleased to be able to include a treat as well. Ngala Nor’dzin comments:
We were teaching in Carlisle for the second time at Easter, and decided to take Richard and Daniel to Alton Towers on the journey north.

Both Daniel and I suffer from motion sickness and have to avoid rides that are likely to make us ill, and none of us are interested in the large rollercoasters nowadays, though Ngala Nor’dzin used to enjoy them when she was younger (and I believe that Ngak’chang Rinpoche also used to love them). I do however enjoy any ride on water. It is wonderful to witness the sunlight sparkling through the cascades of water, and to notice rainbows dancing in the clarity of splash and spray.

Ngala Nor’dzin continues:
My favourite ride was called ‘The Hex’. It gave the illusion of being turned through 360° by rotating the walls of the room. It was obvious from the sensations in my body that we were in fact moving very little, yet my perception experienced a complete rotation. Such experiences are a reminder that we construct our world through familiarity and reference points. It was fascinating and illuminating to see how easily my perception was tricked, and to be able to enter into the experience of sensation as a focus.

Ngak’chang Rinpoche once told me that he had taken various students on alarming rides in order to help them with their ‘fear of everyday life’ Ngak’chang Rinpoche said that it is surprising the number of people who hardly seem to realise that they alive.

Ngala ’ö-Dzin continues:
In the spirit of this, Ngak’chang Rinpoche and Khandro Déchen once took a group of apprentices on a parachute jump – it was on the day before my ordination – and so there was great celebration and a sense of rolpa (rol pa – spontaneous non-dual play) around both events. The apprentice who was last to jump and directly behind Ngak’chang Rinpoche was apparently looking fairly green. When Ngak’chang Rinpoche noticed this he pointed out that people often do not die when they hit the ground the first time. He informed the anxious apprentice that they bounce twelve to fifteen feet in the air – having hæmorrhaged and broken practically every bone in their bodies – and die when they hit the ground the second time. This was sufficiently extreme to make the apprentice laugh and helped him with his terror of exiting the aircraft. He was grinning broadly when he touched down later – as was everyone.