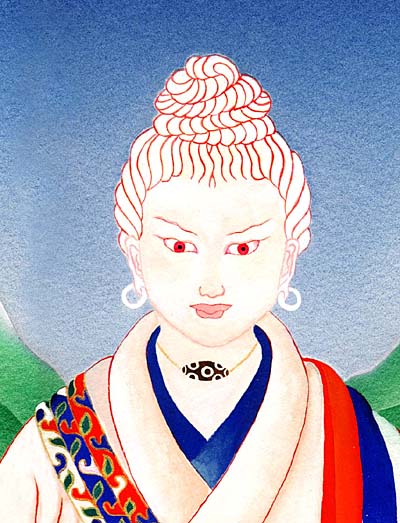 Yogis are sometimes depicted with white hair in thangkas in order to display their great age – but Aro Yeshé is depicted here as a young adolescent. He is shown at the time when he emerged from retreat and gave transmission of the Aro gTér to A-yé Khandro and A-shé Khandro and the five yoginis who were appointed by Khyungchen Aro Lingma to be his five adoptive mothers. Aro Yeshé’s white hair is due therefore to the fact that he was an Albino. This also accounts for his pink eyes. Khandro Déchenen comments:
Red or red tinged eyes are more usually connected with wrathfulness – so the effect in a peaceful face such as that of Aro Yeshé, appears quite strange from the point of view of traditional representation.

Ngak’chang Rinpoche humorously comments:
It is related in a song of Shabkar Rinpoche in which he presents teachings on karma to simple ordinary people – that to be reborn as an albino is the result of pulling hairs form the tail of a pig in order to make paint-brushes. In his previous life Aro Yeshé was Khalding Lingpa’s thangka painter ’a-Shul Pema Legden – so it may be that he was also a maker of paint brushes. This however seems a small inconvenience as compared to the result of Aro Yeshé having been killed in an avalanche.

Aro Yeshé was the previous incarnation of Ngak’chang Rinpoche. Here Aro Yeshé wears the conch earrings of Aro Lingma, and is wearing his hair in the thor-tshug style. The thor-tshug style was most common with togdens who allowed their hair to mat in order that it caused them as little concern as possible. Aro Yeshé’s hair, however, was not matted but combed on the instruction of Khyungchen Aro Lingma who left him the advice that he should distribute his hair as blessings to those who required physical signs.

Aro Yeshé wears Khyungchen Aro Lingma’s nine eyed gZi stone at his neck – a custom within the tradition of the Aro gTér lineage. Khandro Déchen comments:
So prevalent was the wearing gZis by Aro gTér Lamas, that all the lineal successor as well as antecedents of Khyungchen Aro Lingma are ichnographically shown wearing gZis – whether they actually wore them or not. Jomo Chhi’mèd Pema, for example, is shown wearing a gZi but in fact mainly wore a plain grey stone. The stone was of no monetary value and was looped onto a leather thong.