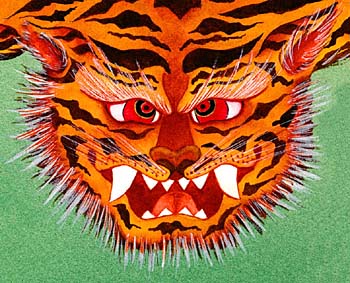 the lineal tiger seat of the Aro gTér Lamas

Aro Yeshé sits on a tiger skin in the tradition of Aro Lingma – but in this depiction the tiger has a ‘living head’ which roars as a symbol of the manifestation of Aro Lingma’s gTérma cycle.

Khandro Déchen comments:
Many Tibetan woven carpets which depict tigers do so showing a ‘living head’ in order to display the fact that the tiger is not the result of hunting. One does not sit on a tiger skin to display one’s prowess as a hunter of tigers – but rather to display the qualities of the tiger in terms of one’s enlightened nature. The tiger in the case of the Aro gTér is always a symbol of Tashi Chhi’drèn who was the tiger upon whom Dorje Tröllö rode.