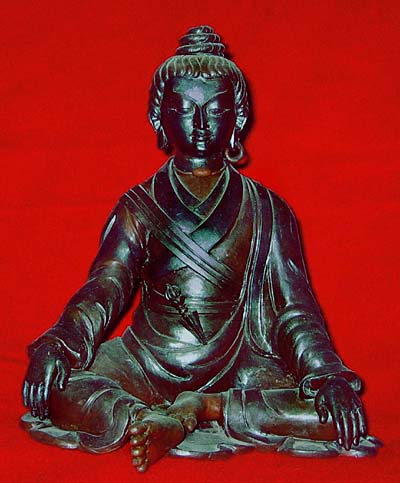 Dzogchen Master—son and principal disciple of Aro Lingma—Aro Yeshé sits in the posture of imperial ease – right foot slightly extended. This Dzogchen posture is sometimes known as ‘mind in relaxation’ or ‘mind resting in comfort and ease’. Aro Yeshé manifested secret activity as a khandropa (mKha’ ’gro pa) – never giving teaching or transmission other than on an individual basis. His two consorts – the sisters A-yé Khandro and A-shé Khandro – gave teachings and transmissions whilst he sat engaged in the four Çôg-zhag – the four absorptions of Dzogchen men-ngag-dé. The three Lamas – Aro Yeshé, A-yé Khandro and A-shé Khandro, always taught and gave transmission as an inseparable triad. Their disciples considered the silence of the enigmatic Aro Yeshé to be as loquacious as the oral instructions of the two khandros. Aro Yeshé was said to be very much a male reflection of his mother, and disciples often saw the two of them merging during the times when transmissions were given to the vajra assembly.

Aro Yeshé wears a phurba in his belt as a symbol of the weapon of the major yidam of the Aro gTér and as an expression of being a tantrika. The phurba also depicts him as being the heir and incarnation of ’a-Shul Pema Legden (’a shul pad ma legs lDan). Had Aro Yeshé been portrayed according to the nature of his practice, he would have no implements or ornaments at all.

The most familiar implement for Aro Yeshé would have been one of his various firearms – but there is no precedent for showing such an implement iconographically – unless such an image exists of DoKhyentsé Yeshé Dorje. He wears a gomtag (sGom tag / meditation belt) across his right shoulder which is symbolic of the practice of rTsa rLung. Within the Aro gTér gomtags are worn by the naljorpas and naljormas rather than the ngakpas and ngakmas – for whom there are other specific costumes. Only the lineage Lamas wear both costumes. He also wears the conch earrings of Aro Lingma, and her nine eyed gZi stone at his neck.