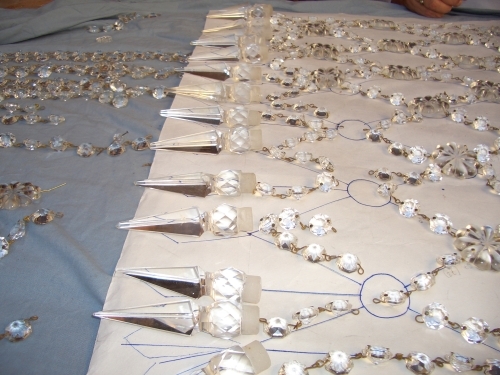 In 2004 The Lineage Holders—Ngak’chang Rinpoche and Khandro Déchen—taught on the subject of Tantric costume and of creating shel rGyan (peaceful ornaments of jewel or crystal) and mu-tig rGyan (joyous ornaments of pearl or coral). As with the ru rGyan (wrathful bone cemetery ornaments) it would be possible for any apprentice, and desirable for the ordained, to own such sets.

As with bell and dorje rings – sets can accord to Mahayoga (wrathful) made of iron (either meteorite iron nam chak – or lightning metal tok chak), Anuyoga (joyous) made of gold, and Atiyoga (peaceful) made of silver, white gold, or platinum.

A stockist of new and period components for chandeliers was researched. The enterprise that was discovered had begun with a personal collection which grew into a restoration, design, and the current hand-manufacture business. Apprentices were able to create a design for the ornaments based on the range of components in their stock. The phurba-shaped end-beads, from a 1960’s chandelier, were discovered in a box at the back of the warehouse. The supplier was able to provide lengths of the smaller beads already connected. This saved significant time, as they would otherwise have to have been linked using wire pins and pincers.

The design was approved by the Lineage Holders, and Naljorma Künzang created a full-scale paper template. The Lineage’s first set of crystal ornaments was then assembled during a single apprentice retreat due to the conspicuous enthusiasm of the apprentices.