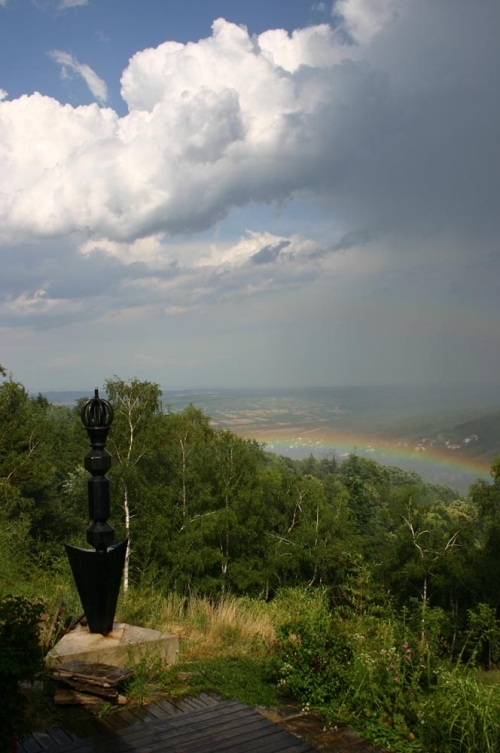 A group of apprentices under the direction of Ngakpa Trögyal Dorje (a disciple of Ngak’chang Rinpoche and Khandro Déchen) built an ‘Aro gTér monumental phurba’ in the Summer of 2003. Aro Lineage monumental phurbas were built in Tibet in the Aro Gar according to the dam ngag of Khyungchen Aro Lingma. They were built in place of chörtens as a means of protecting and authenticating the environment for the practice of Dzogchen. Phurbas large and small of many kinds were made and the land was thereby staked out with vajra nails. The creative genius of Akyong Düd’dül Dorje inspired Aro Lingma to encourage this practice. The ‘enriching phurba’ of Akyong Düd’dül Dorje’ was built at Khyungchen Aro Ling, Forchtenstein, Austria.

The phurba was built according to the instructions of Ngak’chang Rinpoche and Khandro Déchen. The phurba is fifteen feet in height with a blade span of 3 foot 5 inches, and its estimated weight is just over two tonnes. Over three hundred yards of welding wire were used in its construction. The foundations consisted of 125 cubic feet of heavy duty reinforced concrete. The basic material was prepared by a steel company (www.integral.at). It took four hundred working hours and several teams of workers during the retreat from initial excavation to finishing the assembly of the phurba. About ninety hours were spent on the design, technical drawings, and co-operating with the steel firm concerning transport and logistics.