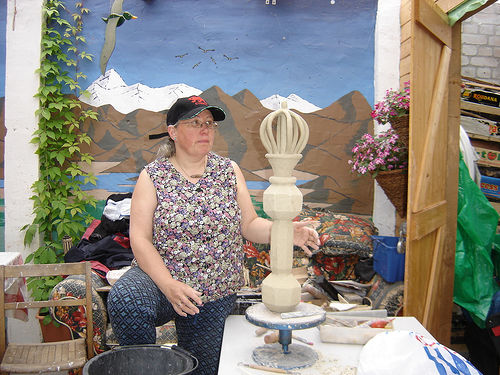 – the top of the phurba

Ngala Nor’dzin is photographed here finishing the ceramic phurba’s ‘handle‘ topped by a nine pronged dorje. The former’s traditional symbolism is that of a lotus pattern surrounded, top and bottom, by unending knots. These speak of the continuity of Vajrayana. Indeed, Tantra means ‘continuity’ – the continuity of emptiness through every manifestation of form. The knots therefore reflect the basic function of the phurba, also called the dagger of emptiness: that of stabbing through neurosis to reveal its empty nature. Nothing is destroyed by the action of the phurba, yet the empty and vivid quality of reality is revealed.

The nine pronged dorje that tops the handle is characteristic of Aro gTér vajra weapons and was created by making clay coils which were then delicately shaped. The nine prong design, present on all Aro gTér style bells and dorjes, symbolically represents the teachings associated with the number nine: the nine yanas but also the nine skies, the nine grim weapons, the nine bardos, and so on.