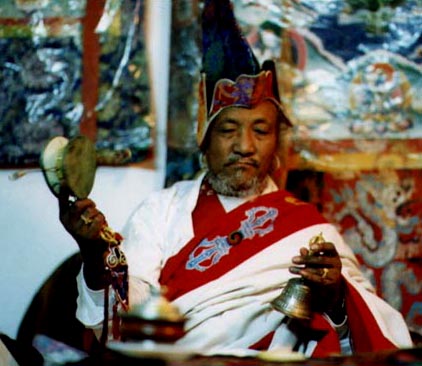 Kyabjé Künzang Dorje Rinpoche is shown here wearing the ngak’phang lotus hat. He wears a white shirt and jacket as a symbol of primal purity. The ngak’phang shawl he is wearing here is similar to the ‘Joyous Male Lineage Shawl’ of the Aro gTér. But this particular one is the white shawl with a red border, which is common to most Nyingma ngak’phang traditions – apart from the fact that the red border is ornamented by vajras of the five colours. In this respect it is identical to the ‘Joyous Male Lineage Shawl’ which bears five-coloured vajras with blue, green, and red segmented ga-kyils at the centres. This kind of shawl is only ever worn by lineage holders and other great Lamas. Sometimes the red borders on such shawls are ornamented with golden vajras, and sometimes include references to the other colours of the primal mandala. Most ngak’phang shawls of the bu-ré type have yellow and green thread woven into them as a symbol of the shawl as a mandala.

This photograph was taken whilst Kyabjé Künzang Dorje Rinpoche was performing Dorje Phurba Tsog’khorlo in Yang-lé-shöd. He holds a five prong drilbu (bell; ghanta) in his left hand as the symbol of wisdom (female), and an ivory damaru in his right hand as the symbol of method (male). Kyabjé Künzang Dorje Rinpoche is a renowned master of Dorje Phurba (Vajrakilaya – the Thunderbolt Nail) and here, performs the Dorje Phurba Tsog to quell the disturbances caused by violations of vows.