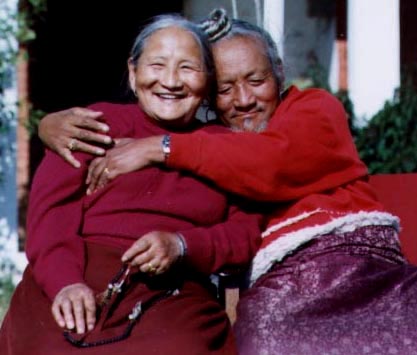 Kyabjé Künzang Dorje Rinpoche and Jomo Sam’phel are shown here sharing a delightful moment as a yogi and yogini whose consummate skill and vivid warmth communicate themselves to all who meet them. This photograph captures the meaning of what is taught in the Khandro pawo nyi-da mélong gyüd – that it is possible to move beyond conditioned frames of reference in terms of vajra-romance.

Ngak’chang Rinpoche comments:
For those familiar with Tibetan culture it will be immediately evident that this is a highly unusual photograph. A moment of tenderness between an elderly Western couple is not unusual – but unreserved affection is not often evident in Tibetan culture, particularly in people of Kyabjé Künzang Dorje Rinpoche and Jomo Sam’phel’s generation. From this it should be understood that this photograph represents wisdom-display and method-display as a living transmission of realisation.