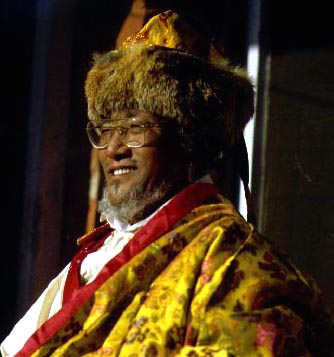 In this candid photograph, Kyabjé Künzang Dorje Rinpoche is shown wearing traditional Khamba dress. His hat is made of wolf fur and one arm of his chuba coat is wrapped back around his waist in the style of a horse-rider. Kyabjé Künzang Dorje Rinpoche wearing this ‘Tibetan cowboy’ style clothing represents the sixth root vow of Vajrayana (under the classification of ‘vow of body’) – the unconstrained adoption of unlimited apparel, ornaments, and implements. This may seem an unusual vow, but it is based on the application of bodhicitta according to skilful means in its most oblique sense. This is an aspect of yeshé cholwa (ye shes ’chol ba), Wisdom-chaos, in which the Lama manifests in the world according to circumstances.

The gö-kar-chang-lo’i dé has often been accused by monastic authorities of ‘wearing mixed dress’ because they never seem to adhere to any fixed form. In terms of clothing, the tantrika is empowered to wear all the Sambhogakaya ornaments of the yidams, and it is on this basis that any kind of appearances can be adopted in order to communicate the nature of reality. The individual nature of the Lama’s personality display can be a good example of the unconstrained adoption of unlimited apparel. One can see from this one example that the Lama’s choice of apparel effects people in many different ways, and that in the right circumstances, transmission can be accomplished simply through the adoption of particular clothing. To be a tantrika one has to become the yidam in order to discover ‘the yidam one actually is’. The eight manifestations of Padmasambhava are probably the best-known example of the unconstrained adoption of unlimited apparel, ornaments, and implements.