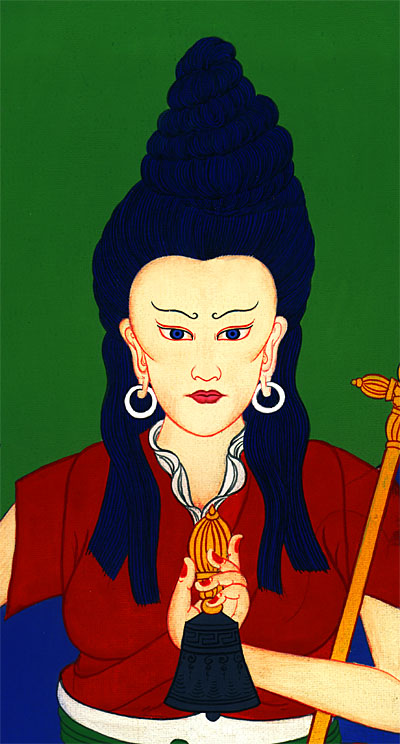 After a period of ecstatic wandering, she reached a place called La-yak Pangdrong in the western part of Lhodrak, where she met a great Nyingma visionary – the gTértön (gTer sTon) Guru Rinpoche Chö-kyi Wang-chuk (gu ru rin po che chos kyi dBang phyug). Guru Chö-wang (as his name is commonly contracted) was one of the five sovereign Nyingma Visionaries, and one of the three major emanations of Padmasambhava. As soon as Guru Chö-wang saw Jomo Menmo he knew that she was the perfect sang-yum or spiritual wife with whom he could bring his realisation to fulfilment. Through her relationship with him, Jomo Menmo was able to clear his spatial-nerves (rTsa) of subtle dualistic eddies and currents within the spatial-winds (rLung). Once his Tsa rLung system flowed with complete freedom he found himself with the capacity of realising the meaning of every symbolic device within the gTérma he had discovered, but which he had been unable to translate (the ‘Innermost Secret Heart Essence Tantra of the Eight Wrathful Awareness-beings’ – Ka’gyèd Sangwa Yong-dzog Men-ngag gi Gyüd chenpo – bKa’ brGyad gSang ba yong-rDzogs man ngag gi rGyud chen po). They stayed a brief time with each other, during which they shared songs of realisation and the quintessential instructions according to their individual vision.

When Jomo Menmo decided to take her leave of Guru Chö-wang, he advised her that the time was not right to divulge the gTérma cycle she had received from Yeshé Tsogyel. He said that it would be better if her gTérma benefited people at a future time. He advised her, instead, to travel throughout Tibet benefiting people in a secret manner. To ‘benefit people in a secret manner’ is an activity that is particular to women, and does not involve any kind of describable method. Secret activity can comprise any human possibility, and can be utterly unobservable to anyone unless they are open to that style of transmission and teaching. An enlightened woman can simply appear to live in the style of an ordinary person with no outer sign of accomplishment, wisdom, or even knowledge. Such a woman is of profound influence merely in the ways in which her everyday life causes the innate enlightenment of others to sparkle through the fabrications of their dualistic conditioning.