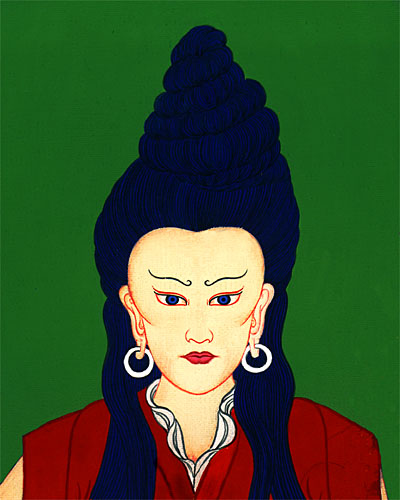 On her wandering throughout Tibet she met many yogis who gained powerful realisations simply by meeting her. The most famous of these was Ling-jé Répa (gLing rJe ras pa), who experienced the same profound purification of rTsa rLung as had Guru Chö-wang.

Jomo Menmo spent her life this way, as a wandering yogini; changing people’s lives irredeemably merely through the fact of their adventitiously finding themselves in her presence. In this way she engendered many lineages of female practitioners, two of whom entered the sky-dimension with her at the time of her disappearance from the world. At the age of thirty-six, she climbed to the summit of Tak-lha-ri (Mountain of the Sky Tiger), and on the tenth day of the seventh month (4th of August 1283) she and her two female disciples offered a Tsog’khorlo; they then entered the sky-dimension and were never seen again. The leftover food, blessed from the Tsog’khorlo, had the power to bring realisation as vast as the sky; the herdsmen who ate what was left gained instant realisation. Jomo Menmo’s extraordinary gTérma returned to the Mind of Yeshé Tsogyel, and was later re-discovered by Rig’dzin Pema Do-ngak Lingpa (the incarnation of Guru Chö-wang).