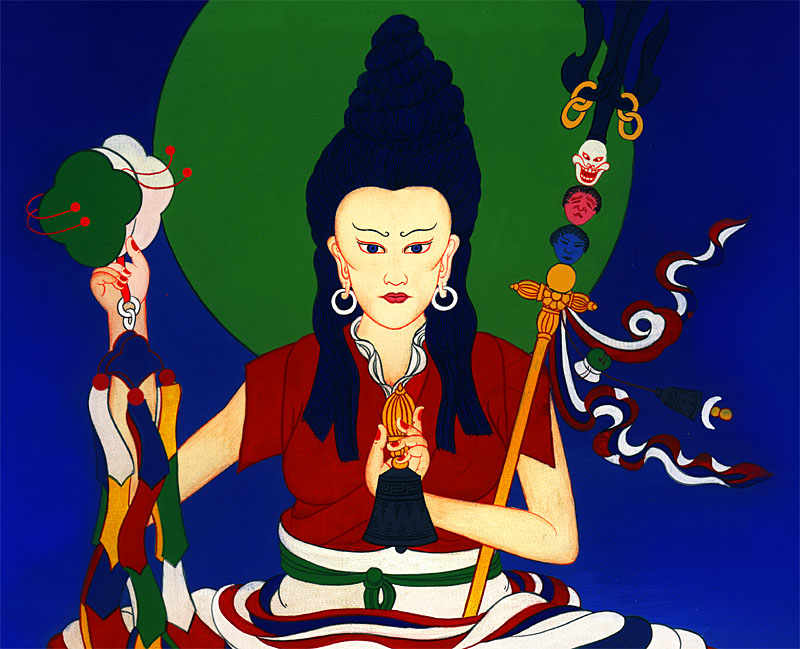 This had both fortunate and unfortunate consequences. Many ordinary people were astounded by her and recognised that she was a realised yogini, but the ecclesiastics made people afraid of her. She was slandered as a psychotic, a madwoman who had been possessed by a demon. Once fear had been stirred up by the ecclesiastics, people became nervous of Pema Tsokyi. The ordinary lost their natural faith in her. They found themselves unable to have confidence in their own spontaneous devotion, in opposition to the ecclesiastical conservatism that styled her as a demoness. The people then began to make accusations against her as well, saying that she had gone to sleep in the mountains and been possessed by a menmo – a demonic female being from another dimension. It was then that she became known as Jomo Menmo – the Demonic Lady.

Because of the ill-feeling that the bigoted and narrow-minded ecclesiastics showed toward her, she decided to leave her home and family and never return to the area. It would seem to be a common problem faced by religious ecstatics and wisdom eccentrics, that they are attacked by religious moralists, academics, and philosophers. From the point of view of the gradual path it is regarded as highly threatening for a simple country girl to gain realisation overnight; and it is often the case that the uneducated have a better appreciation of naturally-born wisdom, than those who have studied for long years in search of the same wisdom. It is also the case that often men, especially ecclesiastic men, are threatened by female wisdom eccentrics. For those who study to attain wisdom there is often the problem of becoming hide-bound by conventional or traditional religious semantics, and then bigotry and anger usually arise.