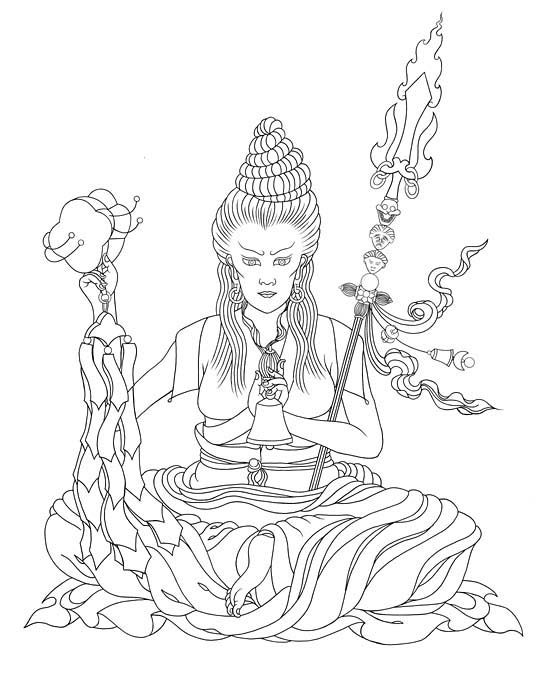 Yeshé Tsogyel said: An activity emanation of my speech will appear in Tsang and she will be known as Jomo Menmo.

The line drawing shown here is by Khandro Déchen (based on the preparatory sketch made by Ngak’chang Rinpoche and Naljorma Dzü’drül Pamo). It is unusual as it shows Jomo Menmo as a mature adult rather than as a girl. Lamas are usually depicted at whatever age their most important life event occurred – and in the case of Jomo Menmo, this was her age at the discovery of her gTérma. This line drawing is based on her age at the time just prior to Jomo Menmo passing into the sky dimension with her two pre-eminent female disciples.

Jomo Menmo Pema Tsokyi (Jom-mo sMan-mo Padma mTsho-sKyid) the incarnation of Ma-gÇig Labdrön was born in the Earth Male monkey year (1248) and passed into the sky-dimension in 1283. She was born in Zarmolung , in the vicinity of the cave in which both Padmasambhava and Yeshé Tsogyel once stayed. Zarmolung is located in an area of Tibet called É-yül, which means ‘primordial-awareness country’. Her father, Dorje Gyalpo, was an accomplished Tantric practitioner. Her mother was a dakini named Padma Paltsum. Her parents named her Pema Tsokyi which means ‘Lotus of the Ocean’.

At the onset of puberty (in the Spring of 1261), whilst she was grazing the yaks and dris in the high pasture lands, she fell asleep in a meadow. The alpine meadow was overlooked by the Déwachen Puk – the cave of great ecstasy, in which Padmasambhava and Yeshé Tsogyel had demonstrated attainment. The place was known as Khyungchen-ling – the place of the great garuda. The garuda is the ‘space-eagle’, which demonstrates, in its being: the unborn, unceasing, ever present state of enlightenment that is the fundamental ground of the Dzogchen teachings and practices. It was from the name of this place that her incarnation Khyungchen Aro Lingma received her name as a gTértön from Yeshé Tsogyel in pure vision in the 19th century.

Whilst asleep, she had a dream of clarity in which she experienced a profound vision. A sonorous voice awoke her from her dream state into a state of pure and total presence. She found herself standing in front of the entrance to a secret cave in the mountainside. She entered the cave immediately and with a sense of keen enthusiasm; she did not know what she would find there, but she was consumed with a sense of immanence without hope or fear. Once inside the cave a vision of a charnel ground unfolded, in which Yeshé Tsogyel manifested in a phantasmagorical variety of guises. These visions melted into each other until they coalesced into the form of Yeshé Tsogyel as Dorje Phagmo. Dorje Phagmo means ‘indestructible sow’ or ‘thunderbolt sow’. Dorje Phagmo is the ecstatically fierce dakini, whose head is surmounted by the head of a sow whose screech shatters illusion. The sound of the screech obliterates all concepts and sharply confides the direct meaning or ro-gÇig – the one taste of Emptiness and Form. Dorje Phagmo was surrounded by many other dakinis; they were making a Tsog offering. At the moment in which she apprehended Yeshé Tsogyel as Dorje Phagmo, a complete body of teaching was revealed to her; this teaching named itself as ‘The Gathered Secrets of Sky Dancers’. She understood its meaning in the instant of its appearance. She realised this teaching was something that she should practise in complete secrecy until its results were obtained. She knew immediately that there would be no obstacle to her fulfilment of these practices. With the arising of this knowledge the vision of Dorje Phagmo dissolved into chö-nyi (chos nyid – Dharmata, the space of reality).

Pema Tsokyi awoke from the vision and went about her daily life. But wherever she went she gave teachings as the spontaneous expression of her Mind, Voice and Body. She gave Mind-to-Mind teaching as the natural expression of her presence. She sang teaching-songs as the natural expression of her conversation, and performed vajra-dance as the natural expression of her deportment. She could leave footprints and handprints in stone – which had both fortunate and unfortunate consequences. Many ordinary people were astounded by her and recognised that she was a realised yogini, but the ecclesiastics made people afraid of her. She was slandered as a madwoman who had been possessed by a demon. Once fear had been stirred up by the ecclesiastics, people became nervous of Pema Tsokyi. The ordinary people lost their natural faith in Pema Tsokyi. The found themselves unable to have confidence in their own spontaneous devotion, in opposition to the ecclesiastical conservatism that styled her as a demoness. The people then began to make accusations against her as well; saying that she had gone to sleep in the mountains and been possessed by a Menmo. It was then that she became known as Jomo Menmo.

Because of the ill feeling that the narrow-minded ecclesiastics showed toward her, she decided to leave her home and family and never return. After a period of wandering, she reached La-yak-pang-drong in the western part of Lho-drak, where she met a great Nyingma visionary – the gTértön Chö-kyi Wang-chuk (guru rin po che chos kyi dBang phyug). Guru Chöwang was one of the five sovereign Nyingma Visionaries, and one of the three major emanations of Padmasambhava. As soon as Guru Chöwang saw Jomo Menmo he knew that she was the perfect sang-yum with whom he could bring his realisation to fulfillment. He was then able to translate The Innermost Secret Heart Essence Tantra of the Eight Wrathful Awareness-beings (bKa’a brGyad gSang-ba yong rDzogs man-ngak-gi rGyud chen po.)

When Jomo Menmo took her leave of Guru Chö-wang, he advised her to travel throughout Tibet benefiting people in a secret manner. To ‘benefit people in a secret manner’ is an activity that is particular to women, and does not involve any kind of describable method. Secret activity can comprise any human possibility, and can be utterly unobservable to anyone unless they are open to that style of transmission and teaching. Jomo Menmo spent her life this way, as a wandering yogini; changing people’s lives irredeemably merely through the fact of their adventitiously finding themselves in her presence. In this way she engendered many lineages of female practitioners, two of whom entered the sky-dimension with her at the time of her disappearance from the world. At the age of thirty-six, she climbed to the summit of Tak-lha-ri (Mountain of the Sky Tiger), and on the tenth day of the seventh month (4th of August 1283) she and her two female disciples offered a Tsog; they then entered the sky-dimension. These two female disciples took incarnation in the earlier 20th Century as A-shé Khandro and A-yé Khandro – the sisters who were the sangyums of Aro Yeshé, the son of Khyungchen Aro Lingma.