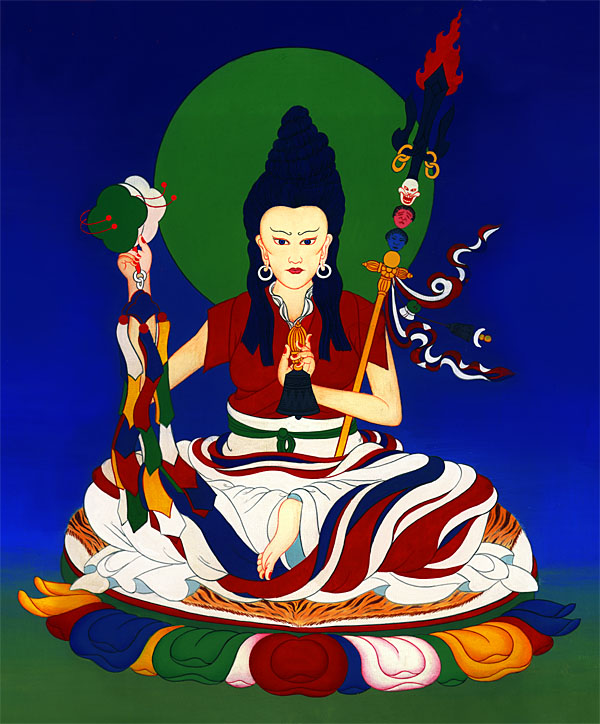 At the onset of puberty—in the Spring of 1261—whilst Jomo Menmo was grazing the yaks and dris in the high pasture lands, she fell asleep in a meadow. The alpine meadow was overlooked by the Déwachen Puk – the cave of great ecstasy, in which Padmasambhava and Yeshé Tsogyel had demonstrated attainment. The place was known as Khyungchen-ling (khyung chen gLing) – the place of the great garuda. The garuda is the ‘space-eagle’, which demonstrates, in its being, the unborn, unceasing non-dual state which is the ground of Dzogchen teaching and practice.

Whilst asleep, she experienced a dream of clarity in which she received a profound vision. A sonorous voice awoke her into a state of pure and total presence. She found herself standing in front of the entrance to a secret cave in the mountainside. She entered the cave immediately with a sense of keen enthusiasm. She did not know what she would find there – but she was consumed with a sense of immanence without hope or fear. Once inside the cave a charnel ground vision unfolded, in which Yeshé Tsogyel manifested in a phantasmagorical variety of guises. These visions dissolved into each other until they coalesced into the form of Yeshé Tsogyel as Dorje Phagmo. (Dorje Phagmo means ‘indestructible sow’ or ‘thunderbolt sow.’) Dorje Phagmo is the ecstatically fierce dakini, whose head is surmounted by the head of a sow whose screech shatters illusion. The sound of the screech obliterates all concepts and sharply confides the direct meaning or ro-gÇig – the one taste of emptiness and form. Dorje Phagmo was surrounded by many other dakinis; they were performing Tsog’khorlo. At the moment in which she apprehended Yeshé Tsogyel as Dorje Phagmo, a complete body of teaching was revealed to her; this teaching named itself as ‘The Gathered Secrets of Sky Dancers’. She understood its meaning in the instant of its appearance. She realised this teaching was something that she should practise in complete secrecy until its results were obtained. She knew immediately that there would be no obstacle to her fulfilment of these practices. With the arising of this knowledge, the vision of Dorje Phagmo dissolved into Chö-nyid (Chos nyid – Dharmata, the space of existence).