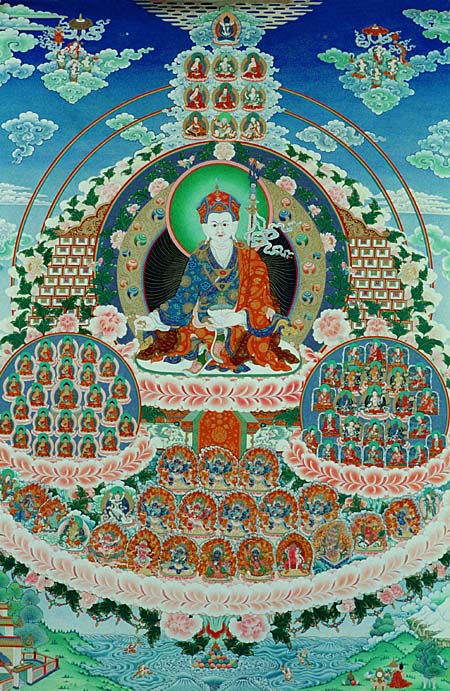 the visual representation of the tradition

The image on this website hardly does justice to the original painting, which is approximately 6 feet by 9 feet. The size of the original thangka impresses upon the viewer the vastness of the Düd’jom gTérsar lineage. The colours used to paint such thangkas are of the richest most distinct character, to help convey the power and stark energy of the pure essence of the elements which they represent.

At the centre of the thangka one finds Düd’jom Lingpa manifesting as Padmasambhava, the Tantric Buddha. As the student of a Düd’jom gTér Lama, one would visualise one’s Root Lama as the central figure’s presence display, personality display and life circumstances display – as the path and beginningless communication of the non-dual state. The Lama would be viewed as not only a manifestation of Padmasambhava, but also as an heir to the methods and wisdom mind of all the Lamas of the Düd’jom gTér lineage.

In Magic Dance, Dung-sé Thrin-lé Norbu Rinpoche (the highly revered son and heir of Kyabjé Düd’jom Rinpoche) states:
The fresher something is, the closer it is to its natural source and natural lineage.

A gTérma tradition such as the Düd’jom gTér places the practitioner within a hundred years from the original supreme source of enlightened Mind from which the teaching emanates. This allows a powerfully direct experience of transmission for the student. Ngak’chang Rinpoche received the entire cycle of the Düd’jom gTér from Kyabjé Düd’jom Rinpoche in Kathmandu, Nepal in the mid 1970s.

Around the central figure of the thangka one finds the teachings of the tradition, Buddhas and bodhisattvas; below them are the yidams, dakas and dakinis, and finally, at the bottom, one will find the Protectors.

Thankfully, due to the tireless work of master painters such as Kumar Lama, we can be sure to have the inspirational iconography which helps bring to life the precious lineage teachings such as the Düd’jom gTér.